The identity of the Jewish state

debate among scholars and activists 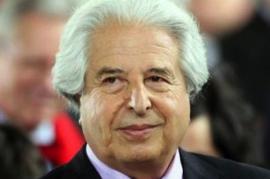 In Israel there is an ongoing discussion about the very identity of the Jewish state and its torn relations with the Palestinians. Saul Friedlander is perhaps the most important Holocaust historian, challenging the views of both the German and the Israeli scholars. Having been rescued during WW2 thanks to a Catholic boarding school that sheltered him (his parents died in Auschwitz), he became particularly committed to studying "the collision between political calculation and moral imperatives" and in this capacity he dealt with the history of Pope Pious XII and other controversial topics of Holocaust history. Then his interests turned to the relations with the Palestinians and he also became one of the earliest members of Peace Now. He in particular aims at encouraging Israel to relinquish its grip on more defensible territories. Now, together with such figures as Avraham Burg and Yair Auron, he takes part in the discussion that has followed Independence and Nakba days and Abu Mazen's recognition of the  Holocaust. Here are some excerpts of his article Zionism has been kidnapped by the extreme rightwing appeared in Haaretz with the signature of Anshel Pfeffer on 18 May 2014.

Explaining why he is no Zionist, he said:

"I am connected to this country. My eldest son and grandchildren live here but I can’t call myself a Zionist. Not because I feel estranged from Israel but because Zionism has been taken, kidnapped even, by the far right. You could say I was a normal Zionist until 1968, when I wrote a short book in French about Israel’s future. I don’t think it was especially daring, but I already then I wrote that we couldn’t continue holding on to territories with Arab population; no one called them Palestinians then. I thought and still do that it would ruin the values of Israeli society from within.”
Friedlander is aware that many Israelis and Jews find it difficult to reconcile his historical research, much of which has focused on the nature of Nazi anti-Semitism and the inaction of German society and the Vatican throughout the Holocaust, with calling upon Israel to relinquish its hold on more defensible borders. “Already in 1974 when I gave a lecture at Hillel in Los Angeles and spoke about my research and also about Israeli policy someone from the audience asked: ‘how can a man who is so aware of the Holocaust’s lessons have such dovish views?’ I answered that learning about the Holocaust may lead some to right-wing conclusions but it can be the other way around and lead you to emphasize more the moral imperative in accepting ‘the other.’ But I have never asked myself why none of this has ever made me paranoid or nationalist. For me the paramount question has always been how the individual man deals with his conscience when faced with injustice and crimes."

As to the moral dilemmas that Israel is facing now, Friedlander added:

“What fascinated me was the way people can ignore what is happening around them – and that is happening to us today as well. We are in a situation where life here seems good. Despite tough social problems, the average Israeli can enjoy life and ignore the worsening political situation, the violence and the impunity.”


And also: “Things that are being said now remind us of some of the bad regimes of the 1930s, but not the 1940s,” he says, making a clear distinction. “But it’s dangerous to compare because the ordinary reader doesn’t distinguish between the thirties and the forties. The moment someone says Germany you immediately think of extermination; it’s a very slippery slope. But the political-messianism and its connection to religion and extreme nationalism we see in Israel today is similar to the main component of extreme European movements.”

You can find the whole article about Saul Friedlander in the box below.