Ramazan Öztürk's photograph introducing us to the Halabja massacre 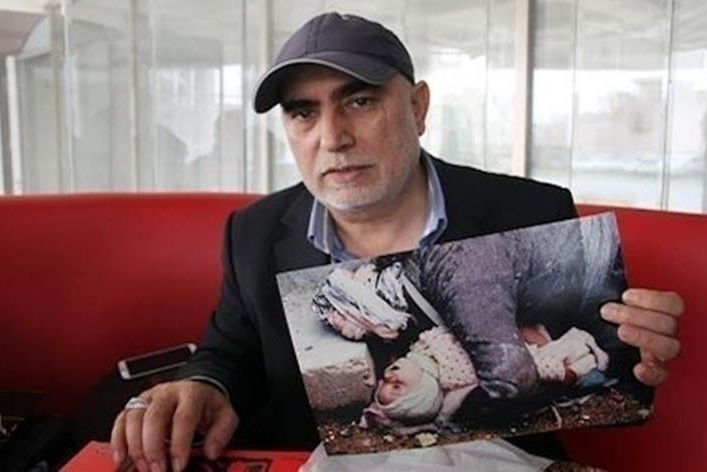 On 16th March 1988, some 5,000 individuals, mostly children, women and elderly people, lost their lives in a chemical weapons attack launched by planes and helicopters of the Ba’athist Iraqi regime led by Saddam Hussein; according to UN reports, between 7,000 and 10,000 people were injured. It was Turkish photographer Ramazan Öztürk who announced the massacre to the world.

“I had been following the ongoing war between Iraq and Iran for years. Two days after the massacre, on 18th March 1988, I arrived in northern Iraq, near the town of Halabja. My intention was to document the war and its effects”. On that very day, Öztürk took the photograph that made him world famous: Silent Witness.

A photographer with Turkish citizenship, Ramazan speaks of the unprecedented silence that covered the town of Halabja. “I approached that area with a helicopter. I had been following wars, massacres and uprisings for over 35 years, but I had never noticed this kind of silence, absolute silence. You could not even hear a bird chirping”. When he arrived in the city, Öztürk found the streets and the houses full of corpses, especially of women, children and elderly people, because younger men had already left the town to fight an eight-year war.

Walking in the streets of Halabja, Öztürk noticed a dead person lying on the ground, in his arms a child, also dead. Öztürk’s famous photograph suggests that the man’s last gesture was to desperately protect the child. The adult’s name was Ömer Hawar and the child who died with him was only one year old.

“70,000 people lived in this town at the time. You cannot imagine how powerful it is to see it almost empty but at the same time full of corpses. It seemed to me that the people who had died had been extremely surprised by what was happening to them and were trying desperately to run for their lives”.

During the war between Baghdad and Tehran, Saddam Hussein’s regime decided to hit Halabja with an airstrike using a number of chemicals to “punish” the Patriotic Union of Kurdistan (UPK), the Kurdish political party, for its stance. The Kurdish political and separatist group has for years fought against the policies of cultural assimilation imposed by the Ba'athist dictatorship and the discriminatory situation suffered by Kurds in Iraq.

Today we can say that it was almost only due to Ramazan Öztürk’s photographs that the world learnt about this massacre, which took place shortly before the long war ended.

According to a medical investigation carried out later by the United Nations, mustard gas was used in Halabja along with unidentified nerve agents. It is no coincidence that after 2003 US invasion of Iraq, one of the most important perpetrators of this massacre was captured: Ali Hassan Abd al-Majid al-Tikritieh, known as “Chemical Ali” precisely because of the chemical weapons bombing of Halabja that he led in 1988.

A few years before his capture, Ali had been appointed governor of Kuwait by the Iraqi regime for one year, from 1990 to 1991, when Baghdad invaded this small Gulf country. “At that very moment, the world found out what had happened two years earlier in Halabja. This happened through that famous photograph of mine. I saw it on the cover of several magazines. The world was talking about a massacre and Saddam’s dictatorship, but it was already two years after the events in Halabja. I always considered this stance to be very hypocritical because during the eight-year war, unfortunately, a large part of the Western world supported Saddam and showered him with weapons, but also with chemicals that he used to massacre 5,000 people in Halabja”.

Ali Hassan Abd al-Majid al-Tikritieh was tried and sentenced to death on charges of war crimes, crimes against humanity and genocide, and was hanged on 25th January 2010. Ramazan Öztürk was also summoned at the trial as a witness: “I have always wanted to look at the perpetrators of that massacre in the face. In the courtroom I presented and showed 47 photographs that I had taken in Halabja. While the judges and the relatives of murdered people were crying, Ali was looking at me in the eyes and at one point he asked me what I was doing that day in Halabja. I told him that I was there as a photographer, to document the kind of atrocities a human being was capable of doing to fellow human beings”.