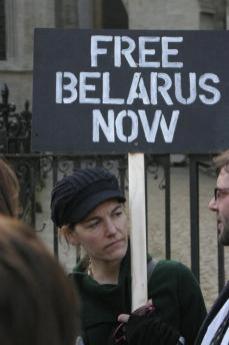 Belarusan farce elections of past December and following mass demonstrations against the new mandate of Lukashenko, defined as "the last dictator of Europe", unleashed a wave of violence of the Government against all kinds of dissent.
This is why several Belarusian and international groups gathered under the aegis of the Belarus Committee to raise the awareness of the public opinion about the violations of human rights committed in the Country. Lately there have been repeated mass arrests pf journalists, opposition members and activists and unjustified pre-emptive detention has been used as well.
We asked some questions to Mushegh Yekmalyan, the Article 19 member in charge of the Asian and European area. Article 19 is an international organization that struggles for freedom of expression and is on the first line of the actions undertaken by the Belarus Committee.


Q: You are a member of Article 19, one of the leading human rights organization at international level. Together with other organizations, such as the Belarus Free Theatre, Amnesty International, Index on Censorship and the English PEN, Article 19 is part of the Belarus Committee, that is struggling for the respect of human rights in Belarus. Could you please describe the main actions and features of your campaign?

A: Campaign is aimed at attracting more attention to the human rights violations in Belarus and the ongoing issues. We are actively involved in the actions of the Belarus working group and also A19 issues a statement on the human rights situation in Belarus, we continiue our work in that direction.

Q: Last 25th of March was also the opening day of the Brussels Forum, which gathers leading political, economic, and intellectual personalities coming from all around the world. This year, Andrej Sannikov, presidential candidate, could not participate but the attendants were informed about the mass arrests of Minsk. The theme of violations of human rights in Belarus has been also discussed in the main EU institutions. What could the EU policymakers do for people in Belarus? Could their decisions really change something?

A: If the EU participating states would use all their influence and also those measures in their arsenal (e.g. OSCE Moscow Mechanism) the situation would be different. There is a serious lack of political will also within the EU member states on human rights issues in Belarus.

Q: How many people, who were detained for their opinion or for taking part in the protests, are still in jail?

A: The number of imprisoned people keeps changing, but those that are released and kept under house arrest are often even under more control than those in the prison. So here the number is not the crucial issue, the important issue is the continuous intimidation even after those people were released.

Q: Many dictatorships fell down in North of Africa in the last months. Do you think these important changes in the international political asset could affect also Belarus?

A: The fact that the political regimes in North Africa are in crisis and falling, does not mean that Belarus will have the same fate soon. Of course one thing is clear, no dictatorship is forever... especially if it becomes more and more brutal, but it is difficult to assess when the democratic change will come to Belarus.

Q: The Index on Censorship just gave the Freedom of Expression awards at the Royal Institution in the United Kingdom and, in the framework of that important ceremony, Belarus’s prisoners of conscience were awarded a “Special Commendation”. In your opinion, what is point of giving this prize to Belarusian prisoners?

A: To express solidarity with them, support them in their extremely difficult circumstances and keep their spirits up.

Q: Do you think information about Lukashenko’s repressive actions could freely circulate abroad or did you notice any kind of “censorship” or limitation on European and other Countries’ media?

A: I have not noticed any kind of censorship in European media.

Q: Campaigners called on international rockstars to abandon concerts planned in Belarus as a sign of protest and important actors such as Jude Law and Kevin Spacey already took part in demonstrations for freedom of expression in Belarus. A great result, isn’t it?

A: It is a great result and more such actions should be encourage to create a momentum.

Q: What would you like to say to our Italian politicians and intellectuals?

A: Just to ask them to look back at tragic historical path of your own country especially the times when Italy was also under dictatorship and remember that there are no happy people or families under dictatorships and it affects to all citizens, even those loyal ones often become victims of cruel machine of terror, so please support people of Belarus in their hardships now...

Q: We have talked about policymakers, VIPs, artists… Is there anything we – the “normal” people – could do?

A: We the ordinary citizens can keep asking our policy makers to be more responsive and prioritise the human rights in their foreign policy.

Q: Thank you for accepting this interview. Good luck for all the projects you are carrying on.

A: Thank you for the interview and interest in the topic. Human rights are everybody’s concern and there should not be any indifferent person left, otherwise we all will lose....