The denial of remembrance and the struggle for democracy 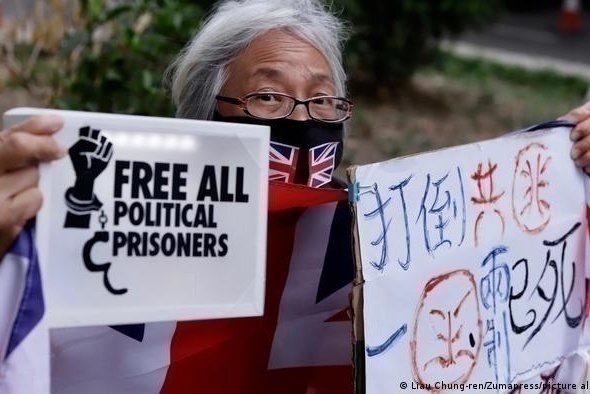 Every year, on June 4, we remember the hundreds of students and workers killed in Beijing in 1989 in what is known as the "Tiananmen Square massacre". On the night between June 3 and 4, 1989, the Chinese army tanks entered the streets of Beijing with the order to clear the square of thousands of protesters who had occupied it for over a month; in a few hours, the army bloodily suppressed the protest. This massacre has indelibly marked both China and the world. Remembering it is not only a duty to victims: it is also a way to keep an eye open on violated rights and denied freedoms today, as well as on the consequences of the suppression of democracy.

Each year, when this date comes around, the Chinese government tries to prevent the demonstrations for Tiananmen Square from taking place by using an iron fist against the activists. Since 2020, commemorations have also been banned in Hong Kong, which had until then been autonomous in this choice.

As yet, 2021 is being no exception. Instead, the vigil on June 4 has been declared illegal, the official reason being the security concerns for the coronavirus threat. Moreover, the Chinese government already arrested some activists. Among them is Alexandra Wong, known as Grandma Wong, a 65-year-old lady and a well-known democracy activist in Hong Kong (often photographed with a Union Jack flag, a symbol of her dissatisfaction with the Beijing government since the former British colonial power in '97 handed over the city to China). Like others, Grandma Wong was arrested for demonstrating solo on China's Tiananmen repression. In particular, Grandma Wong was arrested Sunday on charges of taking part in an illegal assembly and attempting to engage others while marching to the Beijing Liaison Office in Hong Kong. Protesters had requested permission for a small "Tiananmen-themed" march to the Liaison Office, which the government denied. Wong showed up anyway. During the 2019 protests, Wong had also gone missing for more than a year. The activist later reappeared, claiming to have been arrested by mainland authorities during a trip to Shenzhen, a nearby city where she lived. In 2019, Reuters reported this statement from Wong: "I don't have children. That's why I'm not afraid. I don't care about anyone. I only care about the future of Hong Kong's youth."

Even the well-known activist Joshua Wong has suffered repercussions for having participated, in 2020, in the demonstrations for Tiananmen. Because he took part in an unauthorized rally to commemorate the Tiananmen massacre, he will have to serve 10 months in prison, in addition to another 13.5 months for "organizing a protest outside the police headquarters in Hong Kong".

Hong Kong Security Minister John Lee said that "anyone who participates in the remembrance demonstrations will be violating the law". Lee refers to the National Security Law, which says that anyone who organizes, plans, or implements anything illegal to damage or to overthrow the system under China's constitution is acting subversively against state power.

In China, the commemoration of June 4th is relevant to many, and many will probably run the risk of being arrested in order to demonstrate and prevent the memory of that day from falling into oblivion. This situation of violation of human rights cannot fail to arouse concern and indignation at an international level.

At the Garden of the Righteous in Milan, two plaques celebrate Liu Xiaobo - the professor who fought for democracy in China and played a crucial role in saving some of his students at Tiananmen - and Liu Xia, Liu Xiaobo's wife and companion. Liu Xia currently lives in Germany and was an important voice for human rights in China. On the day of the massacre, we invite everyone to learn about these two stories of courage and not to forget what happened.