one month ahead of 25th Tiananmen anniversary 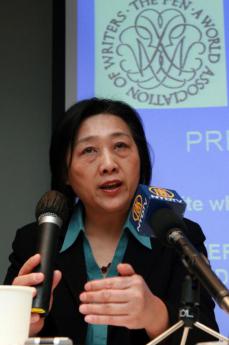 The Chinese authorities confirmed the arrest of journalist and blogger Gao Yu, who was said to be "missing for four days" by authoritative sources, including her friend, the dissident Teng BIao, on past 29 April. The US daily The New York Times and all main observers think she was "pre-emptively detained" to compel her not to talk to journalists about the upcoming 4 June 2014, 25th anniversary of the crackdown in Tienanmen Square.

Gao has been jailed many times since 1989 until now, recently from 1993 to 1999, when she was released upon medical parole. She was imprisoned for her articles, first about the 4 June events, later about current political affairs in China (sometimes "in a darkly conspirational manner" notes the NY TImes). She also keeps a fixed column in the German newspaper Deutsche Welle.

The reporter was taken to an unknown destination while she was headed to a meeting to commemorate Chen Yizi, a communist leader who had opposed the 1989 massacre. Many scholars and activists are working hard to preserve the memory of that year's events, but on a regular basis on the eve of the anniversary they are arrested "pre-emptively". Therefore it is feared that her arrest will be only "one among the many" arrests foreseen for the near future.