after returning from European tour 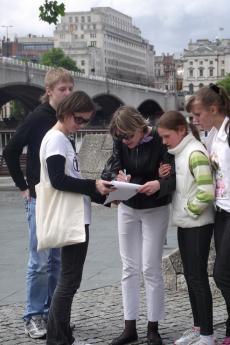 More repression for the brave artists of Belarus Free Theatre. applauded abroad and forced underground in their homecountry. Nikholai Khalezin and Natalia Kolyada, who run the company, were arrested on Sunday at a rally folllowing the farce elections which led to the predictable victory of Lukashenko, were freed on bail and restarted their life as persecuted who play in cellars, woods and other hidden places.

Artiom Zhelezniak, the company's manager, is still in jail upon charges of illegal assembly. Natalya Kolyada told the press that "Developments are unpredictable" and any member of the company could be arrested anytime. "Nonetheless - she said - we really hope we will be able to reach New York, because we are a voice in defence of Belarus and those arrested".

Belarus Free Theatre became world famous in 2008. Since then their shows which the American critique has defined as "moving, adventurous and innovatives", have toured the world, while in their homecountry the 12 actors composing the company are submitted to all sorts of pressure and threats from the authorities.