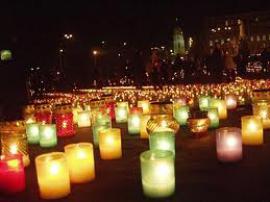 Every fourth Saturday of November one celebrates the Day of Remembrance dedicated to the victims of the Holodomor, the genocide perpetrated by the USSR in Ukraine from 1932 to 1933. The extermination was based on the resistance of the population to the collectivization plan.
In his speech at the inauguration of a memorial in Hamilton (Canada), Victor Rojenko, a survivor of the "Great Famine", declared: “I saw very terrible things. It’s important to know the past so we can “create (the) situation today to not (let it) happen again”. Rojenko was then a little boy, his soul was indelebly marked by the memory of the soldiers who entered the homes and rummaged them in search for food, of the mothers compelled to eat the children's corpses: “I go to sleep and I see that”.
On 29th November 2006 Ukraine passed the law defining HOlodomor as an event caused, and then exploited, based on a precise and provable political choice. With the Resolution of 23rd October 2008 the European Parliament recognized the Holomodor as crime against the humankind.
Many initiatives around the world: commemorations in Canada, ceremony at the Campidoglio in Rome, celebrations at the Kyiv memorial.
At 4 p.m. Ukraine will observe one minute silence, followed by the lighting of candles in memory of the victims.