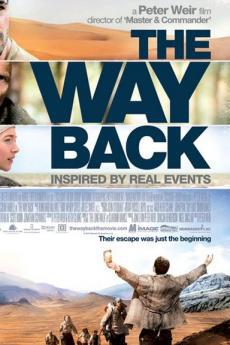 The flier of the film

Release of the movie The Way Back by Australian director Peter Weir. It tells about the dramatic runaway from Gulag of a Polish soldier with six captivity inmates.

Manolha Dargis writes in The New York Times: "“The Way Back,” a heroically minded survival story from Peter Weir, tells the possibly true tale of a group of prisoners who fled a Soviet gulag in 1940 and walked, wandered and all but crawled to freedom. For months a veritable league of national types, united by desperation and the English language, push through the cold and the heat, slipping through forests and across mountains and deserts. Surviving on moldering provisions and precious scraps of protein, dodging predators, two-legged and four-, the travelers embody a besieged humanity that might have been more stirring if their torment were in a rather less exquisite frame".

"The film opens, in a short scene that’s a preview of the horrors to come, with a barking agent accusing a young Polish cavalry officer, Janusz (a very fine Jim Sturgess), of criticizing the Communist Party and spying for foreign powers. Cut to Siberia where, amid the haunting mountains and indigo light, a labor camp officer tells Janusz and hundreds of other accused enemies of the people that (in a somewhat Herzogian, as in Werner, pronouncement) “nature is your jailer, and she is without mercy.”

Pushing the limits of endurance, by Manohla Dargis, The New York Times, 20 January 2011