"We must redouble our efforts"

Remarks by US envoy to UN Samantha Power 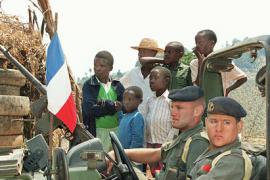 While paying visit to the soldiers of the MISCA, the peacekeeping force in the Central African Republic, US ambassador to the United Nations Samantha Power said the international community must redouble its efforts to stop the ongoing genocide.

First she made a reference to the Rwandan genocide that took place 20 years ago:

It has been 20 years since the Rwandan genocide taught us the price of delay in responding to mass violence. The world has not delayed in reacting to the outbreak of horrific violence here, but it is evident from the ongoing targeting of the other that what we are doing has not yet calmed the situation. Yet as terrible as the situation here remains, it would be far worse if not for your efforts to protect civilians, disarm militias, and create areas where families can be safe. I commend you on behalf of President Obama and United States for your brave service and urge you to persevere.

Then she encouraged the Central African citizens to do their part in stemming sectarian violence, as they the country has a preceding history of peaceful living together between Christians and Muslims. She added that the US should do more to support the French and African troops:

The United States provided 37 vehicles to aid MISCA. Another 200 vehicles are coming plus an armored personnel carrier and more than $100 million in security support, air lift, and logistic assistance. But we know you need help and we are here to learn more about how we might support you better. On the humanitarian side, the world has pledged $500 million in aid but only 29 percent of those pledges have been filled.

We must do more; and we must do it now.

Of course though, she mainly committed to having the UN authorize and launch a United Nations peacekeeping mission. We don't know whether the organization is ready to do its duty, given the past failures it faced in Rwanda and other genocide cases. Maybe she was too lenient about the Western responsibilities in past genocides, attributing the source of disagreements to the failure "to achieve instant miracles". In conclusion, be it in reference with the pacifism dominating the political scenes in many European countries or the problems some forces such as the Chadian contingent are having before their domestic public opinion, she said:

Peacekeepers deserve better. You may not be greeted by a parade when you return home, but please know that you have the world’s gratitude for your courageous service.