the activity of the Holocaust Museum in Washington 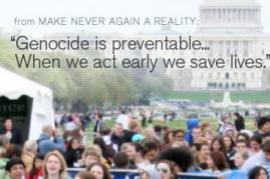 Genocide is preventable.. The slogan of the manifestation

The site of the United States Holocaust Memorial Museum contains a very important section devoted to the efforts individual and States can make to prevent the extermination of entire peoples.

Preventing genocide, this is how the section is called, has two main areas: the one of the actions that people can take and the one devoted to the modern massacres (Bosnia, Congo, Rwanda, Darfur).

The visitors are invited to write a formal pledge of their personal anti-genocide commitment. This was done by both common people and protagonists of the international events, such as UNAMIR General Roméo Dallaire who tried to prevent the massacre of Tutsis in 1994. The Museum then created a Committee of authorities active against the exterminations at the diplomatic level, co-chaired by Madeleine Albright and William Cohen. This body predisposed a series of guidelines against genocide.

As far as the massacres going on in the world are concerned, Preventing genocide contains reports, interviews to survivors, scholarly lectures, a blog, a podcast section, a review of international law and a list of initiatives. At the moment it focuses in particular about Sudan, whose President is accused of crimes against the humankind hitting the Darfur population.