How to prevent genocide 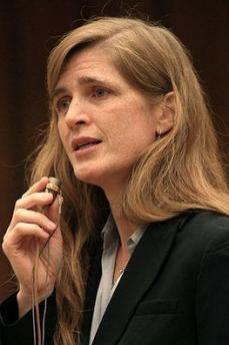 The High Officer for Multilateral Affairs and Human Rights of the United States Samantha Power took part in the forum about genocide prevention in Paris organized by French Mémorial de la Shoah and US Holocaust Memorial Museum.

Ms. Power presented the US guidelines to prevent such scenarios similar to the massacres of Bosnia, Rwanda or Darfur:

•A fresh strategic commitment, an effective decision-making mechanism which deeply affects the policies adopted and is not simply an adhesion to UN resolutions. Such a mechanism must enable to allocate the appropriate resources and the concrete implementation of the political will to prevent genocide.

•An adequate organizational structure. The US President created new institutions and appointed reference figures, fitting the Government with new functions to stop massacres, as explained in the "Strategy of National Security" signed by Obama himself.

•The systematization of prevention, which ought not to be just an abstract project. The most significant obstacles to concrete actions are not the lack of information on specific areas but are "conflicting political priorities and a limited understanding of the Countries in danger".

Obama particularly monitors the Countries undergoing elections, such as Sudan, where there will be a referendum on the secession of the Country's South. The war on terrorism proceeds at the same pace as the prevention of mass crimes.

These goals will be attained thanks to the international mobilization against genocides, born during the ethnic cleansing in the former Yugoslavia and grown in the wake of Darfur. Students, civic and religious committees, lawyers, private citizens can really influence national policies: according to Mrs. Power the reports of civil society are the weapon the governments violating human rights fear the most.