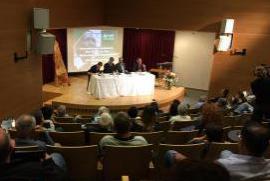 Picture of the meeting at Open University (Gabriele Nissim)

We have already mentioned the impressive change of perspective undertaken by professor Yehuda Bauer since he said “the Holocaust is unique” at the Seventh International Conference on Holocaust Education held in Jerusalem in 2012 and his current statements, expressed during the commemoration of the twentieth anniversary of the Rwanda Genocide at Israel's Open University on 4-5 November, about the chance that mass atrocities – rather than genocide or the Shoah in particular – can be repeated.

The Website Combatgenocide.org hosts an article by the prominent Israeli scholar and Yad Vashem adviser that explains this shift in perspective even better: first of all Yehuda Bauer retraces the history of humanity since its very origins when human beings developed their first interactions with fellow human beings. Then he explains:

We therefore have two conflicting inclinations, possibly instincts, within us: the inclination to kill, and the inclination to act in cooperation, even to rescue. Killing within our group is forbidden, except when a criminal act is performed towards a member or members of our own group, and we invent laws to regulate this. In the ten commandments, the injunction is "thou shalt not murder"; it does not say 'thou shalt not kill'. Killing outside the group is not only permitted, but when young people in funny clothes called uniforms kill enemies of another group who perhaps wear funny clothes of a different color, they get medals for it. Murder is forbidden killing. Killing is permitted murder.

The focus of genocide prevention is hence outlined: it is all about fostering the human instinct to defend or even rescue other humans, even outside our own group. This can be done, the explanation continues, only if we acknowledge that genocide is part of human history and as such can be repeated even if we can find some unprecedented features in a particular tragedy. For example,

the Holocaust was the most extreme form of the pathology we call Mass Atrocities, and which of course include genocide. In what sense was it the most extreme form of genocide known to us to date? Because there, for the first time in recorded history, a decision was arrived at by a major political entity – the German Reich's leadership – to murder every single person they defined as being Jewish, if they could, all over the world. Also, this came from the very center of 'civilized', modern, society, not from its margins, or from outside it. For the first time in history, mass murder was industrialized, and its cost effectiveness was taken into account. Also, it was a purely ideological, non-pragmatic mass murder, generally standing in contradiction to economic and other practical interests of the perpetrators. It was not the number of the victims, the proportion of the victims compared to the total number of Jews, or the sadism and brutality with which it was conducted, but the structural elements that made it what it was.

But the Holocaust, for how extreme it was, is not unique in that it can be repeated, perhaps in different forms, as in the form of politicide in the case of the Ukrainan kulakis or in the Rwanda tragedy. These all are Mass Atrocities and the international community should no more hide behind the uncertainty of definitions when it comes to preventing, stopping them or building conciliation patterns afterwards. It has already acknowledged the need for prevention by establishing the Responsibility to Protect (duty to defend populations from mass crimes and aggressions) in Sudan on May 27, 2008, and a board called as Global Action Against Mass Atrocity Crimes (GAAMAC) in a recent meeting in Costa Rica.

Now, Bauer concludes, it is time the international community really started making its members aware of the importance of complying with these rules, making strongly the case it is done even when they put forward self-interest reasons for not abiding of their responsibilities. Statesmen should closely cooperate with scholars and experts to this purpose. This is necessary

because without moral outrage and deep moral convictions we are nothing but scoundrels without conscience. But without a constant reality check that will make us understand the politics of this world, we will be fools. To quote Barbara Harff again: what we need is 'theory-based practicality'.

And at the height of this combined effort by the art of politics and the power of knowledge there should be a sound philosophy: The great French philosopher, Rene Descartes, said – so goes Professor Bauer’s reasoning - 'I think, therefore I am' (cogito ergo sum). I would suggest we adopt the principle of 'I struggle, therefore I am'. If we struggle for a slightly better world – for there will never be good world, but there may possibly be one with a slight improvement – we will succeed. We must not stop struggling; it is worth a lifetime's effort”.