Can evil be banal?

reflections on Hannah Arendt and the Eichmann trial 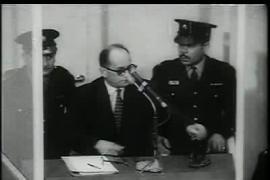 According to historian Yaacov Lozowick, former director of Yad Vashem archives, "banality of evil" was a term coined by Hannah Arendt for Adolf Eichmann, a gray and plain bureaucrat who would have turned into a terrible monster without even realizing it.

Mr. Lozowick counters this thesis by arguing that Eichmann was not only a bureaucrat, but had also been a ferocious anti-Semite since before Hitler came to power. Furthermore he really came into contact with the Holocaust victims in more ways. In Berlin he took part in roundups, in many Countries such as France, Holland, Greece and Slovakia he supervised deportations and in case they weren't carried out "correctly" he was in charge of looking for "better" solutions. Also, Adolf Eichmann and his fellow bureaucrats had the task of combating Western propaganda convincing populations and journalists that murdering the Jews was a good thing. To sum up, he surmounted many hurdles to kill as many Jews as possible.


The essay: The Eichmann trial

Deborah Lipstadt devoted to Eichmann a book still unpublished in Italian. According to Franklin Foe the writer does not counter Arendt's ingenous intuition about the banality of evil, which, in more elaborated ways, has become the mainstream storiographical interpretation.
Yet she accuses Arendt of ignoring the anti-Semitism and downlooking the evidence of the importance of Eichmann's role in the planning of genocide, in order to be better able to describe him as a pathetic bureaucrat.
It is always useful to recall the world in which the trial took place: a world which didn't acknowledge the Holocaust and even ignored it.
This is why Ben Gurion and Hausner were extraordinarily good at using the trial to educate the people.
They had the Nazi genocide occupy the headlines of all the world's newspapers. Nearly 20 years later the Holocaust became in people's minds something proportionate to its real extent (it was precisely the trial to assign the name "Holocaust" to the Nazi extermination of Jews).
Critics purported that Israelis violated the principles of fair trial while trying to pursue this loftier goal. But Ben Gurion and Hausner really meant to achieve this broader aim with the trial.