26 years since the genocide of Srebrenica

Remembrance and the search for truth 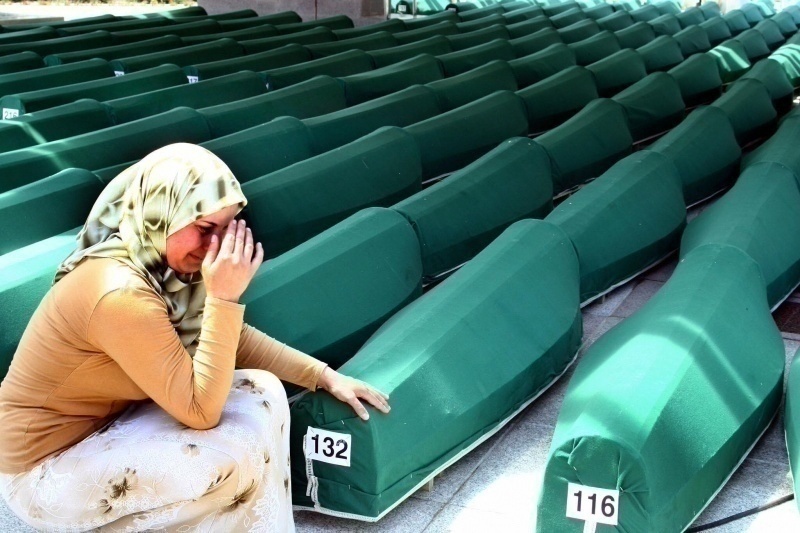 On July 11, 1995, the troops of General Mladic entered the town of Srebrenica and killed 8372 Muslim men and boys, throwing them in mass graves. All this happened despite the presence on the territory of a contingent of Dutch UN blue helmets. On June 8, 2021, twenty-six years later, a UN tribunal at The Hague confirmed a life sentence on genocide for Ratko Mladic. The conclusion of the trial brought back to collective memory the unbearable horrors of a genocide where thousands of people were hunted, killed, and buried in a matter of days. As of today, many people do not have a place to visit their loved ones who have been murdered, and the mass graves related to the Srebrenica genocide that were found so far are 94. The Mothers of Srebrenica, an association made of the mothers of those killed in Srebrenica, gathered together to listen to the sentence against Mr Mladic at the Srebrenica Memorial Center. Since the inception of this association in '96, the Mothers of Srebrenica have fought for truth and justice regarding their children's death. Unfortunately, they are now less and less.

In this context, the Guardian journalist Kim Willsher chose to remember a woman who turned into a symbol of all that evil, Ferida Osmanovic, known as "The Hanging Woman". Together with the photographer Lynn Hilton, Willsher went to Bosnia in April 1996 to give a name to the woman portrayed in the shocking shot that appeared on the front pages of newspapers worldwide. It took many months for Hilton and Willsher to discover that the girl was Ferida, mother of two children and wife of one of the Muslim men killed in Srebrenica. In Srebrenica, the Osmanovics ​thought they would find a safe place thanks to the presence of the UN. Needless to say, this was not the case. Ferida's husband Selman Osmanovic, aged 37, was an optimist: he believed the West was going to save him, and even when things started to worsen, he decided that he would not hide in the woods. Ferida, aged 31, could not bear the pain of losing him and the cruelty of what she had seen: she thus took her own life and left behind her children Fatima and Damir, who today are believed to still live in Bosnia.

The two boys talked to Willsher, told her about their mother and how she said goodbye to them that morning, knowing she wasn't coming back. "We know our mother hanged herself. We went to her grave, but it had no name, just ‘Hanged’ on the wooden headboard. So we wrote her name on it in felt-tip pen", Fatima said.

"When Mladić lost his appeal", Willsher said, "I retweeted this story, which was published in the Mail on Sunday on 14 April 1996 before newspapers had websites (the only record of it now is a yellowing cutting). The response from the Bosniak community at home and among the diaspora suggested many felt that what they had suffered had been forgotten". Irena Korik, for example, wrote: "It means a lot to know people still think about us. I was the child of a mixed marriage between a ‘Bosnian Serb’ and a ‘Bosnian Muslim’: I put these terms in quotes because they were nonsensical before the war. Mladić unleashed so much evil, but ultimately he failed and he will rot in jail. It’s a sort of justice, but it will not bring back the thousands of souls who were lost. People don’t realise how horrific it was; they never saw a child die from being shot in the head by a sniper while on the way to school.”

Survivors still suffer from the consequences of those atrocities: mothers still mourn their children; justice often did not come or came too late. The memory of those events must be a warning for the future. Only recently has the Netherlands started the process of compensating the families of the victims of Srebrenica. In 2019, the Dutch Supreme Court had, in fact, ruled that the Netherlands was responsible, to a minimal extent, for the deaths of some 350 victims that were taken from the Dutch UN battalion base in Potocari on July 13, after seeking refuge there. The court ruled that the Dutch battalion acted illegally because it knew that the men in Srebrenica were in serious danger of being killed. The ruling estimated that their chances of survival had been ten percent had they been allowed to remain at the base. As a result, the compensation provided to the closest relatives of these victims will amount to ten percent of the damage they suffered.

The Mothers of Srebrenica, mainly through the words of their president Munira Subasic, have disagreed with this decision. Their disagreement was only partially related to the amount of compensation (which they hope will be restored to 30%, as the Court of Appeals in The Hague had previously ruled). Mostly, the Mothers of Srebrenica maintained that the compensation had nothing to do with a true assumption of responsibility. "They are doing this procedure and payment just because of a judge's ruling. No form of benevolence or compassion has ever been shown,", the lawyer of the Mothers of Srebrenica said. "I don't care about the amount," said Mother Mirsada Malagic, "The main thing is for the Dutch government to admit that they are responsible for what happened to my son."

On this 11th of July, the day in memory of the victims of Srebrenica, we will remember what happened. We will do so with the awareness that so much pain could have been stopped and, above all, prevented. Reviewing those events helps us detect the signs of evil at their very inception and avoid future atrocities, future "mothers of Srebrenica".