special 20th anniversary of the end of Communism 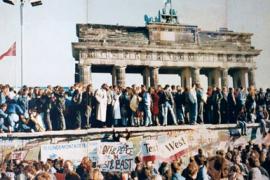 Berliners celebrate the reunification of their city on the Berlin Wall

On November 9th 1989 the Berlin Wall collapsed.
During the year of the twentieth anniversary of the collapse of Communism there is debate about the end of Communism in the Centre-European Countries: the causes, the timeline of the fall, the analyses of the events.

Testimony by George Soros tycoon and promoter of the "open society"

The Guardian's special feature on the Berlin Wall


Personal memory of Father Jerzy Popieluszko
I was in Warsaw when he was murdered, by Annalia Guglielmi


Exemplary figures of moral resistance
Biographies of the "dissidents"

15th February 1989, Afghanistan: the Red Army ends the withdrawal of the troops from the occupied territories.

March 1989, Russia: in Moscow, after the elections, birth of the People's Congress of Deputies, the democratic successor of the Supreme Soviet.

2nd May 1989, Hungary: the Hungarian reformist government opens the borders. It is the first breach in the Iron Curtain and the Hungarians let pass those who flee from Eastern Germany.
Hungary Special Report

4th June 1989, Poland: the first half-free elections are held. They lead to the triumph of Solidarność.
Poland Special Report

11th September 1989, Bulgaria: a decree was passed which rehabilitates almost 1,000 victims of Stalinist terror. In November a vote of no confidence is passed and the socialdemocratic party, forbidden in 1947, legally reorganizes and resumes its activities.

9th October 1989, Germany: 70,000 people rally in Leipzig by shouting the slogan "we are the people" to the agents of the "people's police" drawn up to crush the uprising.
Press review for the anniversary: Germany recalls rallies that helped bring down Berlin Wall by Nancy Isenson in AFP/Reuters
The day I outflanked the Stasi, testimony by BBC diplomatic editor Brian Hanrahan in the BBC news

14th December 1989, Moscow: the funeral in honor of Andrej Sakharov, the great dissident become a deputy, turns into a bath of crowd. The new Constitution inspired by him enters into force.

16th December 1989, Romania: the demonstrations in Timisoara lead to a people's revolt against the Communist regime, and result into the death sentence to Ceaușescu and the end of the dictatorship.

Victims of Communism Memorial Foundation, the article for the Wall:
Communism and Tyranny still survive

The "NY Times" collects the readers' pictures:
Where Were You When the Wall Fell?

Berlin, until 1st January 2010
Exhibition "Art of the two Germanys - Cold War Cultures" with artworks created on the two sides of the Wall.
read the exposition overview

Washington, until 10th December
Exhibition "Art: inside the gulag" with paintings of Ukrainan artist and former Gulag inmate Nikolai Getman
read the review

Berlin, 17th October - 30th November
Exhibition "Behind the Iron Curtain" on Socialist Realism organized for the 20th anniversary of the 1989 events.
visit the exhibition's site

Prague, until 23rd November
Exhibition "We didn't give up, stories of the Twentieth Century", an event devoted to those who took stance against totalitarianism: antiNazi and antiCommunist resistants, dissidents, camp survivors, 1989 demonstrators. Under the auspices of the Czech Prime Minister, organized by the Post Bellum association.
read the event presentation

Prague, 9th November
The Institute for the Study of Totalitarian Regimes publicizes lists of intelligence servicemen.
the lists

Berlin, 9th November
A large-scale performance with a symbolic fall of the Wall using a "domino effect" highlighted by the artworks of world painters and politicians. Concert with Daniel Baremboim in the presence of Dietrich Genscher, Michail Gorbatchev and Kofi Annan.
read the event description

Berlin, 30th October
Carl-Wolfgang Holzapfel gets back to the cell where the Stasi had locked him in the 60es and lets a webcam film him "to show the role the Resistance played in bringing down the Wall".
read the BBC report

Prague, Nostic Palace, 6th October, 9.30 p.m.
Conference "Twenty Years After: Central and Eastern European Communist Regimes As a Shared Legacy". Organized by the Institute for the Study of Totalitarian Regimes.
read the programme

Berlin, East Side Gallery, from June to November: Opening of the celebrations of the Wall's Collapse.
full Berlin calendar

by the editorial staff with the contribution of Annalia Guglielmi