​Impressions following a trip to Cambodia 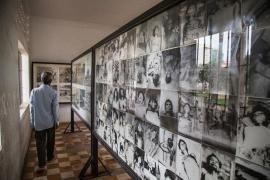 The Museum of the jail of Tuol Sleng

The landscape that welcomes us at our arrival in Siem Reap, not far from Phnom Penh, mirrors the one that lies in my imagery thanks to my previous readings and the tales of the friends who visited the place. Although it is the end of November, it is all a feast of flowers, palm trees, exotic plants even around the hotel where we settled .

We are welcomed by a relatively young guide, Kim, who proves a relentless walker. Kim will keep for the whole three days a very professional attitude, although smoothed by a personal inclination for irony and joke.

This is why I am trying to take advantage of the coach trips between one site and another to ask Kim some questions about his past. He is a very kind person and he does not escape what could seem to be the morbid curiosity from an annoying tourist, although he tries all he can to keep a professional, i.e. self-controlled, not to say detached, attitude.

I start from a truly ignorant question on who the current chief of government is in Cambodia, shiftily – as the professional ethics of tourist guides would forbid invasions into the political field - aiming at getting to know his opinions about the current political situation in the country. As an ignorant, I am genuinely struck by his reply. The name of the current Cambodian President is Hun Sen, he says, a former Khmer rouge. While he replies, he becomes very pensive, as if he grasped my perplexity. “There are still many Khmer rouges around”, he says. Only at that moment I realize, as the absent-minded Westerner that I am, that Cambodian political life is far from pacified, or rather, it has not been for a long time after the collapse of Pol Pot’s regime. For many current politicians it sufficed to repudiate their involvement in the bloody regime of the late Seventies to appear politically acquitted and remain in the top posts of power in Cambodia. On the other hand they are legitimated, rather than helped, in this operation of suppression that they carried out, by the general tendency to collective repression. In fact, a need to be omologated to the needs of consumerist society is strongly felt by the people on the street and in their behavior. Tourism is a powerful activator of this.

I kindly asked Kim to tell me his personal story. He changes face expression and becomes inexorably sad despite his efforts to keep detached. He was still a child when the Khmer rouges compelled him and his family to evacuate Phnom Penh and head to the countryside. He was separated from his parents and put into a camp together with other children. Only an uncle survived, who in order to hide his own “bourgeois” origins, had torn his hands to look like a peasant. After the regime’s collapse, he was taken care by an association that let him study foreign languages, including Italian, until he became an interpreter. This way he could find a job quite easily, also thanks to the touristic development that has taken place in Cambodia in the recent years..

When we leave Siem Reap and move to Phnom Penh we are taken in charge by another guide, a woman in her mid-age, Joshi, kind and self-controlled. We spent only one day with her. She took us to visit the royal palace of the town and behaved like all guides in this world, professionally and with detachment.

It does not take long before you understand she has a story to be told, a story that changed her life completely. In 1975 she was a young teenager. She was going to face a similar fate to Kim’s one. Forced to work as a farmer in one of the many Cambodian labour camps, she went through the same experiences lived by same age girls. She was compelled to an arranged wedding in the Angkar Organization will, the supreme deity of the revolutionary movement. The ways of such wedding shocked me. It was celebrated during a day chosen by the party, as the day of collective weddings. The name of a young lady was combined by chance to the one of a young man; the two had the duty to marry, in order to assure a progeny to the revolution. This kind of process in part respected the typical Khmer culture (among the others) arranged weddings tradition. What was new is the collectivization of weddings, that is their celebration during one single day. Most of all, the tradition did not allow - as it used to happen in prison camps - spies to be sent to check that the wedding was truly consumed. “If the spy, lied in wait behind the wedding hut, heard quarrels or disagreements, he had to tell it to the supervisors, and the day after the couple was killed”.

Joshi was fortunate: the man she found stayed with her all life long and he gave her four children, two of them now living in Europe - more precisely in London and Paris. She was though lucky only under this perspective. For the rest, all of her family of origin was exterminated and she still holds back traumas evident today. It was her turn to bring us to the old Tuol Sleng High School, converted in a place of torture and death by Khmer Rouges - the one they used to call “Security Office 21”, currently transformed in the Genocide Museum. At the moment of getting off the bus, Joshi gave us last information for the visit. She won’t come with us.

When I will see the instruments of torture, the bare bed springs on which prisoners where fastened to be tortured, the photographs of the dying people and the executioners, the horror still lingering in the sleazy rooms - then I will understand the reason why our guide could not cross the threshold of that building.