If Khmer Rouges' apologies are not enough 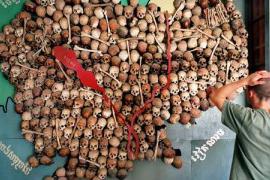 Cambodia's PM Hun Sen called for a law to punish those who deny the Khmer Rouges genocide in a climate of fierce clash on the background of the former communist leaders.


At the hearing 4 victims have been allowed to question directly the defendants from the charge of planning and perpetrating the genocide of 2 million people out of 7 carried out by Cambodia's Khmer rouges in the years  1975-79.


Thoutch Pandara, a 67-year old Cambodian woman naturalized French, recalled how the khmer militias seized families and even hospitalized people threatening them with rifles and took them to the villages of Kampong Meas and finally Pursat, where not only the great communist-caused famine started, but also they were compelled to forced labour. Her parents wer obliged to forced labour with teen labourers and they died 1976 with all other relatives of hers as they could not put up with the younger workers' pace.


She said the conditions in which they died were not even worth the one of animals. Animals in fact are buried, but Ms. Pandara's parents died in an undescribable way, throuwn into a ditch, naked, she does not even know where and she carries a deep sense of guilt for not being able to rescue them by bringing them some rice or else. She said she cannot forget about this.


One of the "big brothers" of the Khmer rouges under trial, Khieu Samphan, replied in two ways: on the one hand he delivered his apologies directly to the victims, on the other hand he said that the culprits for the atrocities "were not the average people, but the merciless leaders". Therefore the genocide would not have been carried out by millions of "willing executioners", but only by a bunch of fanatic people's leaders. While awaiting the next hearings, we wonder what is the meaning of the "apologies" without a proper assumption of responsibility.