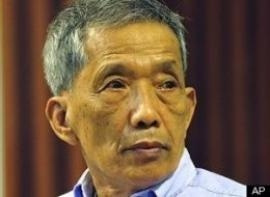 Thirty years after the end of the dictatorship comes the first landmark sentence for Kaing Guek Eav, the director of the S-21 camp where more than 12,000 people were killed. Between 1975 and 1978 the bloody regime run by Pol Pot exterminated nearly 1,800,000 Cambodians. The Extraordinary Chambers of the UN-backed Courts of Cambodia have started the trials only now. There are still four Khmer leaders awaiting trial: "brother number two" Nuon Chea, former head of state Khieu Samphan, former foreign minister Ieng Sary and his wife Ieng Thirith.
Kaing Guek Eav, known under the dictatorship by the name of Big Brother Duch, was sentenced on accounts of murder, torture, rape and crimes against humanity. Only 20 prisoners survived detention in S-21 camp: during the trial the witnesses have told about the tortures inflicted to the inmates in the notorious death prison.

Ong Thong Hoeung, J'ai cru aux Khmer Rouges in French (English title: I believed in the Khmer Rouge), Buchet Chastel 2003. Report-book about the horror of the re-education carried out by the Khmer regime and the tragic fate of a people.

Roland Joffé, The Killing fields, dramatic, Great Britain, 1984. The story of Dith Pran, the interpreter who succeeded in taking the New Times journalist Sidney Schenberg into safety and for this reason was imprisoned in the labour camps.

See the links in the box below