The protest march for Kamp Armen 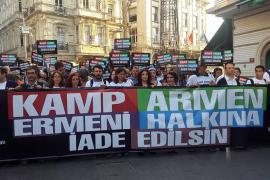 Protest march to save Kamp Armen in Istanbul (www.norzartonk.org)

"Enough with delaying tactics - Return Kamp Armen to the Armenians" is the slogan of the protest march called tonight, at 19:30 in Tunel Square downtown Istanbul, by the Armenian youth organization Nor Zartonk and the Kamp Armen Solidarity movement to demand the return of the former orphanage and summer camp to its rightful owner, the Armenian community. A protest rally will also be held on Yuksel Steet in Ankara.

The struggle to save Kamp Armen started 52 days ago, on May 6, when a group of resisters blocked the demolition of the building, located in the suburb of Tuzla, on the Asian side of the city. The resistance movement will march again this evening to urge the solution that seemed to be reached at the end of May, with the commitment of the current owner of the site to return the former orphanage to the Gedikpaşa Armenian Protestant Church Foundation.

Since no formal legal development has yet happened, Nor Zartonk, the organization committed to support human and civil rights that nearly two months ago occupied the area with a sit-in blocking the bulldozers, called other activists and citizens to march to achieve the restitution of the camp, as it had been promised.

Opened in 1963, Kamp Armen had hosted more than 1,500 children, including Hrant Dink, the Turkish journalist of Armenian origin, founder and editor-in-chief of the bilingual weekly Agos and advocate of the dialogue between Turkey and Armenia for the mutual understanding of the two cultures and histories, who was killed in 2007. As a child Hrant Dink had spent his summers at the Tuzla Camp, where he met his future wife, Rakel; together they took over the administration of the camp, until it was closed and confiscated by the State in 1987, under the accusation of breeding Armenian militants. The former orphanage has a great symbolic value in the memory of the Istanbul Armenian community and the threat of its demolition right in the centenary of the genocide sparked a strong reaction among activists, and Rakel Dink has been on the forefront in the demonstrations.

The resistance to save Kamp Armen in the past weeks has become a national issue and has stirred the political circles. Some members of the HDP - Peoples’ Democratic Party (which got a great result at the recent election) showed their solidarity to the protesters, and even the Prime Minister Ahmet Davutoğlu interfered in the matter to urge a quick solution to the case.

Faced with these pressures the current land owner, Fatih Ulusoy, gave up on the project to build luxury residential property in place of the orphanage and agreed to donate the plot to the Gedikpaşa Armenian Protestant Church Foundation, “in order to contribute to the thoughts and sensitivities of our Armenian citizens, and social peace and unity in our country…at this time, when the sensitivities of our society are being provoked via various speculations related to the year 1915", had said Ulusoy in a statement to the Anadolu news agency.

The goal of the Gedikpaşa Armenian Protestant Church would be to demolish what's left of the old building and build a new one, as soon as the site will be returned.