The memory of the Armenian Genocide 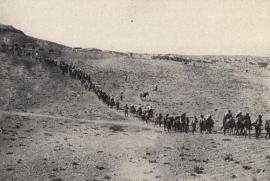 Within the framework of WW1 (1914-1918), the Ottoman Empire, nowadays Turkey, was the scene of the genocide against the Armenian people (1915 – 1923), the first one in the Twentieth century. Through it the government of the "Young Turks" that seized the power in 1908 perpetrated the elimination of the Armenian ethnic group, which inhabited Anatolia since VII century b.C.. In those horrific years, two thirds of the Ottoman Armenian perished, i.e. nearly 1,5 million people.

This year, after one century, there will be numerous celebrations in memory of the victims.

26 April, New York: In Times Square, from 1.45 to 4 p.m., thousands Armenians invite all other people to join them in a commemoration rally "at the crossroads of the world";

7, 8, 9 May, Washington D.C.: commemorations not only to commemorate those who were lost, but also to celebrate the birth of a new Armenia and the thriving Armenian communities around the world. The event series comprises A Journey through a Century of Armenian Music. to highlight the ongoing vitality of Armenian artists and musicians.

21 April, Berlin: Worldwide reading in memory of the victims and along with a call for international recognition of the genocide. Held by Lepsiushaus Potsdam int he framework of the international literature festival of Berlin, where a call to read texts on the Armenian genocide all over the world on its centennial will be presented.