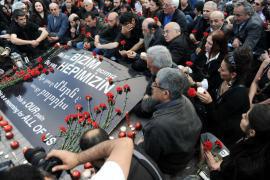 People mourning the victims of the Armenian genocide

Gérard Malkassian, Philosophy teacher in Paris, is one of the promoters of the call We make a dream, together that was launched on the centennial of the Metz Yeghern with other French intellectuals of Turkish and Armenian descent committed to the reconciliation process between Turkey and Armenia. From those demands, that express the wish for a peaceful future respectful of the history of both peoples, a long conversation between Gérard Malkassian and Gabriele Nissim in the premises of Gariwo has unfolded, after the professor came back from a trip across Armenia and Turkey during the celebrations of the centennial of genocide.

The professor's outlook of the Turkish Armenian issue is innovative, above all if we consider the prevailing stance among the diaspora Armenians. He focuses on the need to open up to dialogue with those Turks who are willing to look at the past in an openminded manner, without setting as a preliminary requirement for dialogue the use of the G word, i.e. the word "genocide". According to Malkassian, the recognition of genocide is not the starting point, but the final achievement of a common pathway of reconciliation that needs be undertaken for ethical and moral reasons  first, and only then historical and political ones. This requires the active contribution of the Armenians. As far as this is concerned, there are some encouraging signals.
The growing openness on the Turkish side, underlines Malkassian, does no more concern only a restricted circle of intellectuals, but is involving more and more people aware of the debate on freedom, the minorities and democracy. Despite Ankara's genocide denial, many Turkish scholars dedicate themselves to historical research into the still unknown features of this genocide - including, among many others, the extent of the Turkish population's involvement in the extermination of the Armenians. It is also to these scholars that we owe the organisation over the years of many meetings and political discussions that helped awaken the conscience of many people and give an extraordinary momentum to new research threads, like the one on the Ottoman-Turkish Righteous, which in Italy is at the core of Pietro Kuciukian's studies.

On the other hand, we witness an “awakening” of the Turkish Armenians. Through literature, journalism, music, and associations, the latter rediscover their own culture, their ties to the Turkish society, and emerge in the public arena claiming an active role in the building of modern Turkey. They are mostly young people, university students, intellectuals, heirs of Hrant Dink's - i.e. of the Turkish journalist of Armenian descent who founded the bilingual newpaper Agos and was murdered in Istanbul on 19 January 2007 - who are the soul of cultural experiences like the one of Aras publishing house or the Nor Zartonk (New Awakening) movement.

After the words of Pope Francis, which draw again the world's attention to a long forgotten genocide, and the positive signals both from the Turkish and the Armenian side, including, last but not least, the recent rise of a filo-Kurdish party sensitive about the theme of minorities that slightly eroded the consensus of the AKP of President Erdoğan's -, we may have some more reason to hope that this dream can eventually come true.

The full text of the conversation, of which we present an excerpt here, is available in the Further Insights box below this page.

Nissim: A whole century has gone by since the Armenian genocide. I believe the most important thing right now is to raise a discussion within Turkish society and pull down the walls that prevent dialogue. The call “We have a dream, together”, which you have launched with other French intellectuals of Turkish and Armenian descent, is headed precisely in this direction. This reminded me of what happened amidst the Cold War,when civil society opened up to dialogue with the dissident movements of Eastern Europe. Those were the years of the Helsinki Accords, by which Russia was demanded to respect human rights. Things though started to change precisely thanks to that form of grassroot dialogue. In the same way, I am convinced that today we’ll obtain something good from Turkey only there is some push from within the civil society...

Malkassian: Yes, we are persuaded, too that dialogue and reconciliation are the goals that need be followed,although our stance is not understood by everyone, above all in the Armenian community of France. Despite the steps forward that were taken, many believe that international pressure is still the uncontroversial way to deal with the Turks. Of course, we must consider that Turkey was not defeated in the war, therefore we cannot solve things like in the German case. Ours is a different problem.

Nissim: This reminds me of Armin T. Wegner, the German writer to whom I dedicated my recent book (La lettera a Hitler, ed. Mondadori, Editor’s note). After the Holocaust he was one of the first people to deal with the key subject of reconciliation, when it was absolutely unthinkable that a Jew could talk to a German. Only after the Nurnberger trial and the admission of guilt of President Adenauer – who also acknowledged the right of Jews to reparations – Germany could regain credibility in the eyes of the world. But there is a huge difference between yesterday’s Germany and today’s Turkey. In the former case the entire generation of villains was still alive, which is not the case in Turkey. And this is precisely the point! We cannot deal with the recognition of the Armenian genocide as if events had unfolded yesterday, because they did a century ago. I have always told my Armenian friends that their contribution to dialogue is essential, and we should not only ask ourselves “What can the Turks do?” but also “What can the Armenians do to open this dialogue with the Turkish society?”. This is the question that I would like to ask you, too.

Malkassian: First of all I must say on the Turkish side there is a growing openmindedness on the issue. Ten years ago it concerned only intellectuals, but now it involves more people with a new outlook and a remarkable degree of awareness, above all regarding themes such as the democratization of Turkey, the recognition of minorities’ rights, the relinquishment of violence as a means to handle problems. On the Armenian side, I believe we have to start a dialogue with all those who are willing to look at the past in a more openminded way, even though many of them do not use the g-word. I am persuaded that everything else will follow spontaneously. Putting the use of the word “genocide” as a requirement for dialogue is not certainly of help for anybody.

Nissim: Which word do you use?

Malkassian: I will mention the case of the two promoters of the initiative born around the appeal “We have a dream, together”. Michel Marian, French philosopher of Armenian descent, and Ahmet Insel, economist and political scientist, in 2009 co-authored the book Armenian Taboo, in which two intellectuals tried for the first time to exchange their family as well as personal views of Turkish-Armenian history, handling the genocide issue, too. In the book, later translated into the mothertongues of its authors, Insel did not use the word “genocide” but, like many people, he spoke about crimes against humanity.

Nissim: I recently took part in a conference in Israel with some prominent genocide scholars, including Yehuda Bauer who on the occasion put forward the proposal to adopt the term “mass atrocities” (MAS) to refer to war crimes, crimes against humanity, ethnic cleansing and genocide. By doing this we could overcome the confusion about the various definitions, last but not least the definition of genocide established by the United Nations in 1948. Maybe, under these terms, also dialogue with the Turks could become easier…

Malkassian: Yes, we can accept to start dialogue with people sharing this opinion. We have seen that people like Insel are willing to recognize reality, thus genocide itself. Thus we must be more openminded and not focus exclusively on the G word; doing so would equal preventing dialogue from broadening. Furthermore, we need a more morally focused approach to the issue.