Is history reopening wounds for the Armenians?

Turkey and the massacre of Kesab 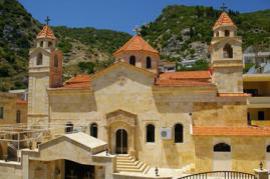 On March 21st, al-Qaeda militants, escorted by Turkish soldiers, entered the Armenian village of Kesab, in Syrian territory , looting , killing and desecrating churches . Kesab , a few kilometers from Musa Dagh that was immortalized in Werfel 's novel , is a symbol of Armenian resistance to evil and also the extreme religiosity of the Armenians. It can be said that Christianity of the early martyrs is preserved here as well as the spiritual soul of Armenia and at the same time this village bears the memory of the genocide of 1915. This small country of Cilicia was essentially decimated, as 85% of the population was killed in that tragic year in which the government of the Young Turks exterminated a million and a half Armenians . Earlier, in 1909 , the Armenians were forced out by the Ottomans . This now marks the third expulsion of the Armenians from Kesab .
In 1939 , under pressure, Cardinal Aghajanian , who later would have been a candidate for the papacy in the conclave that elected Pope John XXIII, was assigned to Kesab, Syria , and which was a safe harbor for years. That is until these tragic events of 2014 , which prompted the Armenian communities around the world to wonder about whether the Turks continue to hate , and even worse their desire to suppress the Armenians by any means.
A delegation of Armenians of America has met with officials of the U.S. State Department to ask Obama to intervene on behalf of this minority "that has American families anxious to protect and give them shelter." Even the Armenian community of Rome condemned the massacre, which forced 600 families, the descendants of victims of the Armenian Genocide, to flee, except the old, unable to leave Kesab and whose fate is unknown now.


The Honorary Consul of Armenia in Italy Kuciukian Peter wrote:

Kesab, writes the Washington Post, was attacked because it is a known stronghold of the Assad government that, although he is a vicious dictator, has traditionally protected the Christians and the rest of his biggest supporters, the Alawites. But beyond the geopolitical games Kesab is still the cradle of Armenian civilization and as such an important testimony of European culture in Asia. Thus, concludes Kuciukian,

The hope is that Turkish civil society advocates for a protest movement that blocks the possible revival of a policy of persecution of the Turkish government, a policy which would wipe out years of efforts to build a coexistence with respect for truth and human rights.

What outcome will queries to the UN or the protests of U.S. senators have? Let's not forget the victims of the war in Syria, so we keep alive the awareness of what is happening to Christian minorities in the Middle East and other parts of the world and unite forces of all men of good will who are committed to justice and peace .