"Facts of 99 years ago still haunt us"

testimony of two Armenians from Detroit 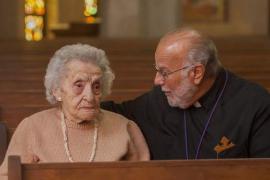 In Detroit there are two centenary survivors to the Armenian genocide, Ramela Carman and Asya Titova. Journalist Lauren Abdel-Razzaq of Detroit News has interviewed them, retracing a tale that has crossed the whole Twentieth century marked by genocide. In particular in 1915 the government of the Young Turks that had seized power in Turkey after the outbreak of World War One planned and executed the extermination of 1,5 million Armenians, who were deported into the Syrian desert.

24 April 2014, a date which is symbolic in a time where Syria is still center stage for a bloody civil war, is the 99th anniversary of the Armenian genocide. In Detroit there was a ceremony in a church, where Ramela recounted she grew up without her father, as the man had abandoned his family and assimilated into the Turkish society to escape murderers.

She is still haunted by the memory of genocide, where also her mother and all her siblings died. "I still can't believe it. It is Armenian life".

Asta Titova's life seems taken from a history book. She is 102 years old and she survived two genocide cases, the Armenian one thanks to her family's runaway to Russia, and the Jewish genocide. Furthermore in 1980 she lived in Baku, and when the war of Nagorno-Karabagh broke out and the Azeris started mass murdering the Armenians she had to flee to the USA.

Her grand-daughter Araksina Titov recounts: "She shows us the old photographs, tells us the old stories. For us Armenians it is important to educate the others to learn about genocide. We hope this can help prevent it from reoccurring in the future." During second world war, the Titovs' home was occupied by the Germans. Asya had to prepare the meals and do the home chores for them, but she hid two Jewish families in the basement. Her daughter-in-law asked her: "Why did you do?" and she answered: "What should I do? They are people, too. Everybody wants to live".