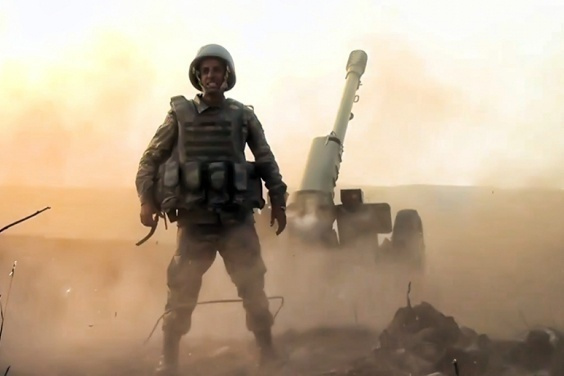 The executive board of the International Association of Genocide Scholars, in a statement issued on Monday, condemned Azerbaijan for its attack on Armenia’s sovereign territory last month. It also warned of a “significant genocide risk” against the population of Artsakh.

The group called on other international academic and rights groups to join the widening of chorus of condemnation of Baku’s continued aggression. It also called on Azerbaijan to withdraw its troops from Armenia.

The IAGS also urged the international community to “ hold the authoritarian regime of Azerbaijani President Ilham Aliyev accountable for the crime of aggression (crimes against peace), war crimes and crimes against humanity perpetrated against Armenia and Armenians since September 2020.”

Below is the complete text of the IAGS statement.

On 13 September 2022, Azerbaijan launched an attack on the sovereign territory of the Republic of Armenia. Using heavy artillery as well as multiple rocket launchers and attack drones, the Azerbaijani forces shelled the cities and towns of Vardenis, Goris, Ishkanasar, Kapan, Sotk, Artanish, and Jermuk and the surrounding villages in the Republic of Armenia. This attack resulted in over 210 confirmed deaths of Armenian soldiers and numerous civilian deaths and injuries. While a tenuous ceasefire still holds, Azerbaijan’s violence continues, including allegations of executions of Armenian prisoners of war. Over 7,000 civilians have been displaced, and civilian homes and local infrastructure destroyed in an attempt to ethnically cleanse Armenians from a large portion of the Republic of Armenia.

Significant genocide risk factors exist in the Nagorno-Karabakh situation concerning the Armenian population. Noting in particular that this violence occurs in the context of a prior genocide against ethnic Armenians in 1915 – 1923 by the Ottoman Empire (which became Turkey), and the continued relationship between Turkey and Azerbaijan. In 1920, Turkey sought to disarm the Armenians and arm the Azerbaijanis, resulting in conflict, Armenian exodus, and atrocities against Armenians in an Azerbaijani offensive. Turkey continues to support Azerbaijan in the Nagorno- Karabakh conflict (including through the provision of drones and mercenaries). Turkish President Erdoğan has referred to the Armenians as “occupiers,” despite centuries of history of Urartians and their descendants, the Armenians, in the region.

The current violence is part of a lengthy, related process of violence by the Azerbaijani regime against the indigenous Armenian population of the South Caucasus. There have been several armed conflicts between Armenia and Azerbaijan over the Nagorno- Karabakh territory, in the 1980s-1990s, with the most recent beginning in September 2020 and continuing into 2022, despite supposed ceasefires. The current conflict has included the use of indiscriminate weapons, and civilian deaths and displacement.

Azerbaijani authorities have been openly delivering hate speech against Armenians. Acts of incitement or hate propaganda have targeted Armenians. The UN Committee on the Elimination of Racial Discrimination (CERD) has specifically noted that the following acts are risk factors for genocide:

Azerbaijan’s state policy includes anti-Armenian discourse and propaganda, including through government speeches and the media. For example, Azerbaijan’s President Ilham Aliyev has made statements such as: “Armenia as a country is of no value. It is actually a colony, an outpost run from abroad, a territory artificially created on ancient Azerbaijani lands.” Aliyev does not recognize the internationally recognized territorial integrity of the Republic of Armenia: “We have perhaps a hundred times more grounds not to recognize the territorial integrity of Armenia than they have not to recognize our territorial integrity. Because everyone already knows this, and so does the world community, that in November 1920 our historical lands of Zangazur [Syunik], as well as Goycha [Sevan], were severed from us and annexed to Armenia. The city of Yerevan was ceded to Armenia on 29 May 1918. So, there are many factors for us, as they say, not to recognize the territorial integrity of Armenia.” Aliyev also uses dehumanizing language, such as: “We chased them out of our lands like dogs. I said that we would chase them, that we would chase them like dogs, and we chased them, we chased them like dogs.” Such statements indicate a systematic campaign to end the presence of Armenians in their historic and present-day homeland. These and other statements demonstrate the existence of a risk of genocide, and may amount to incitement to genocide and possibly other international crimes.

There is also a history of cultural destruction in the conflict, leading to a significant fear from Armenians that after the peace deal, which saw the return of Armenian-held land to Azerbaijan, Armenian sites will be neglected, desecrated or destroyed. Some Armenian monuments and churches are hundreds of years old, such as the Saint Nishan church, Dadivank monastery complex and khatchkars in cemeteries, dating as far back as the 9th Century and earlier. It is common for Azerbaijan to present ‘alternative’ histories for Armenian churches, claiming they are ‘Caucasian Albanian’ and were ‘Armenianised’ only in the 19th Century. Such claims have all been debunked outside of Azerbaijan. Rewriting of history and cultural destruction are key hallmarks of genocide. The goal of génocidaires is to destroy, in whole or in part, the targeted group, and one way the perpetrators carry out this destruction is through cultural destruction: eliminating the very essence of the group’s identity, and any trace that they existed in that location.

The Executive Board notes that the International Court of Justice (ICJ) has recognized the seriousness of the hate speech and cultural destruction by Azerbaijan towards Armenians and Armenian culture. In its Provisional Measures order of 7 December 2021, the ICJ considered Armenia’s claims of violations of the Convention on the Elimination of all forms of Racial Discrimination (CERD) plausible, and expressed concern that such violations ‘may have serious damaging effects’ on the protected group. In the interim before deciding on the merits of the case, the ICJ has ordered Azerbaijan, inter alia, to:

“take all necessary measures to prevent the incitement and promotion of racial hatred and discrimination, including by its officials and public institutions, targeted at persons of Armenian national or ethnic origin; and take all necessary measures to prevent and punish acts of vandalism and discretion affecting Armenian cultural heritage, including but not limited to churches and other places of worship, monuments, landmarks, cemeteries and artifacts.”

Attacks on the sovereign territory of the Republic of Armenia also likely amount to a violation of the United Nations Charter, and breach the Helsinki Final Act and the ceasefire agreement signed by Armenia, Azerbaijan and Russia on 9 November 2020, ending the 44-Day Second Karabakh War (27 September 2020 – 10 November 2020).
In order to remove the risk of genocide, the International Association of Genocide Scholars Executive Board calls upon:

• The international community and academic and cultural organizations to condemn violence and hate speech by Azerbaijan against Armenia and take all necessary measures to compel Azerbaijan to cease hostilities and hate speech against the Republic of Armenia and the indigenous Armenians of Artsakh.
• Azerbaijan to comply with the International Court of Justice Provisional Measures order of 7 December 2021.
• Azerbaijan to remove its soldiers from the territory of the Armenian Republic and to respect the right of self-determination of the Armenians of Artsakh as guaranteed under the United Nations Charter (Chapter I, Article 2).
• The international community to hold the authoritarian regime of Azerbaijani President Ilham Aliyev accountable for the crime of aggression (crimes against peace), war crimes and crimes against humanity perpetrated against Armenia and Armenians since September 2020.