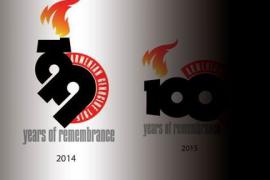 Recent events in Syria remind us of the tragic fate of the Armenian communities in the Ottoman Empire and under the government of the Young Turks. In 1915, over one million and a half Armenians were deported to the Syrian desert, murder, enslaved or forcibly assimilated to the Muslim Turkish majority in the name of pan-Turkish ideology. Many commemorations are going to be held on and around 24 April, the date of the outbreak of genocidal violence.

New York, 27 April, Times Square, from 2-4 pm: Commemoration of the 99th anniversary of genocide. The theme is: “Turkey is Guilty of Genocide: Denying the Undeniable is a Crime."

In Boston, Massachussetts, on 11 April at Massachussetts State House, from 10.30 a.m.: A joint resolution will be given to architect Donald Tellalian, who designed the abstract sculpture at the Armenian Heritage Park. In addition, Anahis Kechejian will help lead young people remembering their ancestors, as part of “Stand Up for Your Survivor.” Children from St. Stephen’s Armenian Elementary School and the Armenian Sisters’ Academy will sing “America the Beautiful” and the Armenian national anthem.

At Clark University, Worcester (MA), famous historian Taner Akçam will hold speech “On Truth and Memoirs: The Case of an Armenian Soldier in the Ottoman Army” at 7:30 p.m., Thursday, April 17, in Tilton Hall at the Higgins University Center, 950 Main St.

Vicenza, from 16 March-6 April 2014 photograph exhibition "Armin T. Wegner and the Armenians in Anatolia, 1915" in collaboration with Union of the Armenians in Italy and the Consulate of Armenia to Italy. Villa Tacchi, viale della Pace, 87

Bari, Piazzale Cristoforo Colombo, 24 April, 3.30/6 p.m., meeting organized by the Armenian community - Eucharistic celebration in honor of the Martyrs of Genocide, followed by screening of movie The lark farm

Rome, 24 April, 10.15 a.m., commemoration of the Armenian Genocide at the garden of Piazza Lorenzini

Naples, 24 April, 6 p.m, Holy Mass at the Church of Santa Caterina a Chiaia, followed at 6.45 p.m. by the laying of flowers at the Monument to the Martyrs - organized by the association Regina Elena Onlus and the Armenians from Naples


24 April, Paris, 11 a.m.: commemoration at the City Hall followed at 3 p.m. by Mass in the Armenian Apostolic Church of rue Jean Goujon and at 6 p.m. by rekindling of the flame on the tomb of the unknown soldier at the Arc de Triomphe. At 18.30, gathering before the statue of Father Komitas


27 April, from 10 a.m. to 8 p.m, in the forecourt of Notre-Dame de Paris, 99th day of awaress about the Armenian Genocide held by collective VAN (Vigilance against Negationism), with exhibition "Men standing" by Bruce Clark dedicated to the memory of the victims of genocide in Rwanda.


For initiatives all around France, look up here

24 april, 4.30 p.m., London. Vigil of the Armenian Community of the British capital to commemorate the Armenian Genocide in Hyde Park Corner.