Sudan, one Country or two? 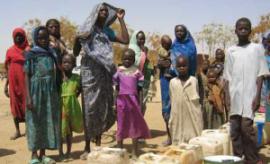 Elections in Southern Sudan over secession from the rest of the Country. The region, inhabited by Christians and faithfuls of the African religions differently from the Muslim North, could become the youngest State on earth.

The vote, valid with a 60% turnout, was a condition of a 2005 deal to end the two-decade North-South conflict which witnessed gross violations of human rights especially in the region called Darfur. Following this crisis Sudanese President Omar al-Bashir was indicted of war crimes and crimes against humanity by the International Criminal Court based in The Hague.

Results will be announced on 2/6 or on 14 February if there will be any appeal. In sight of a victory, supporters of secession have already decided anthem and flag of the new State, whereas its name is still uncertain.

Some observers think the North might face stronger Sharia if the South splitted. Others, including former President Jimmy Carter who is monitoring the polls, believe that dangers, exemplified by an attack to a convoy of voters coming back from the elections, could be outpaced by a whole people's "great peace will".