they will face 20 lashes 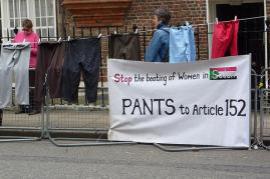 Pants hanged in London as a protest for Lubna

The women arrested with Lubna Hussein for wearing trousers were sentenced to flogging and the payment of a 100-dollar fine.

9th September
Sudanese women demonstrate
against Lubna Hussein's conviction
The penalty of 40 lashes to the Sudanese journalist guilty of wearing trousers was commuted into a fine.
Lubna Hussein though refused to pay the amount declaring she was ready to go to jail rather than recognize the crime prescribed by the laws introduced in 1991 within sharia. The journalist fights for the abolition of art. 152 of the Sudanese penal code, punishing "anyone who wears a garment which is undecent or violates public morality".
Hundreds women wearing trousers gathered in front of the tribunal to support her.
Lubna Hussein was freed after only one day thanks to the intervention of the Union of Sudanese Journalists which paid the fine.