Let’s turn on the light on Africa

A commitment to genocide prevention 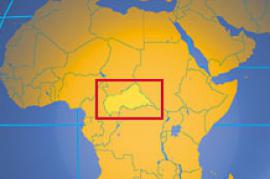 Central African Republic on a map (picture by nationsonline)

Italian Foreign Minister Emma Bonino has recently called for more attention towards both lights and shadows in the African continent. As proven by the fact that 40% of the African population is very young, this continent is rich at opportunity and energy. The President of Sierra Leone, Ernest Bai Koroma, has just been awarded by association “Nessuno tocchi Caino” for abolishing death penalty.

Yet, despite the good news coming from this and other African countries, there are still many countries in Africa that are struggling hard to reach reconciliation or even to counter the actual risk of genocide.

Often, resources such as diamonds or coltran, rather than ensuring widespread wealth, are the motive behind dirty wars. If we add poverty, corruption, the role of the former colonial powers, the expansion of Chinese interests, the increasing success of Islamist preaching and the intricacies of ethnic and religious belonging, we find ourselves in front of an explosive blend. To this we must add the steady discrimination of African women, who are the pillars of the economy but at the same time not only matter too little, but are also subject to rampant violence as it happens in Congo.

If Africa has witnessed its own success stories, like the liberation from Apartheid thanks to the relentless effort and self-sacrifice of the late Nelson Mandela, the past 20 years were sadly marked by such events as the Rwandan genocide, the massacres in Darfur, the war in the DRC, the Islamist insurgency in Mali, the fratricide conflict in South Sudan, the persecution of Christians in various countries, the unpredictable revolts in Maghreb, the harsh behavior of some authoritarian leaders such as Omar al-Bashir and the late Muhammar Gaddafi,  and now the awful situation in the Central African Republic, which according to UN sources is a crisis of genocidal nature. This is country is now holding its breath after the election of Bangui Mayor Catherine Samba-Panza to the Presidency. The new President has immediately called for reconciliation, right at the moment in which the European Union eventually decided to send a peace-keeping mission to the country.

Pope Francis is trying to shed light on the developing world, as he showed on Sunday by appointing 16 new Cardinals, many of whom come from Africa. Human rights Watch, too is urging the United Nations to make an effort not to let this continent, the cradle of humanity, fail again. 20 years after the “genocide fax” reporting in vain to the UN top official that the Rwanda genocide was breaking out, improving the situation of Africa means for example struggling for justice enforcement and freeing Africans from the kind of victimization that prompts many of them to think that international justice is biased against their countries.
It should be made clear that the International Criminal Court in The Hague is not prosecuting leaders because they are African. The international community must step in to prevent and punish genocide according to law wherever extreme evil rears its ugly head again. It is true that all 26 individuals who have appeared before the ICC until now are African, but also 5 judges including Chief Prosecutor Fatou Bensouda are of African descent, and so are also dozens legal professionals working in the Hague. The ICC cannot answer political allegations, thus it would be necessary that the Security Council intervenes to clear these controversies once and for all.

The spiraling violence between the Muslim and Christian militias in the Central African Republic means that too many people, including women, children and the elderly, are experiencing war on a daily basis, with bullets whistled over their heads, corpses everywhere (including churches and mosques), militiamen directly targeting the civilians and shortages of water, power, medicines and so  on. Italy should step in within the framework of the European Union, which in turn should not miss this occasion to let its voice be heard, after many failures in human rights protection.

Even the rejoicing that followed for a while the resignation of Michel Djotodia was immediately replaced by chaos and violence. Refugees now amount to one million out of a population of 4,600,000 people. Many of them come from Chad, and are now overcrowding a provisional refugee camp near Bangui airport. The children involved in the war are 2,300,000, an unprecedented number. As UNICEF representative Anthony Lake said, “Children are murdered because over being Christian or Muslim. They witness to horrible crimes. 6,000 of them have been recruited by the militias. Many are subject to brutal attacks. Many are wounded, ill or displaced. Children were forgotten in this crisis and they did not matter to the decision makers”.

We could shed some light on this awful situation by finding the courage to denounce genocide, even though it was more comfortable to keep these thoughts at bay during the Christmas holidays. The American ambassador to the United Nations, Samantha Power, who was the first top official in charge with the US Atrocities Prevention Board created by Barack Obama, visited CAR and pledged American support to end the sectarian strife that has engulfed the country, saying that the international efforts to stop the violence have been “essential but not sufficient”. Economic motives are hampering the US resolve to act against this new horrifying case of genocide by funding a United Nations mission. Another option could be the support to the forces of the African Union, yet it is made questionable by the many dictatorship involved. Turning on lights on Africa and getting involved in such complicated and often awkward negotiations will not be an easy task for Italy.