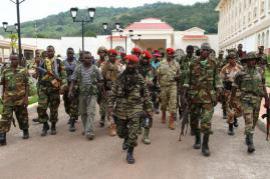 Unprecedented human rights violations in the Central African Republic. This is what emerges from the Amnesty International report of the abuses perpetrated by Seleka, the coalition on power since March 2013.  “Seleka forces – said Amnesty researcher on Central African Republic Godfrey Byaruhanga, - are guilty of bombings, lootings, executions, torture on civilians, rape and children recruiting. Despair and hopelessness have reached a new peak following the steady and massive human rights violations, that can be defined as war crimes and crimes against humanity”.   The picture is made more complicated by a sharp division of the country into factions, an element which makes it impossible also to President Michel Djotodia’s government to control Seleka.   The report denounces rape of women and forced recruitment of minors: the number of child soldiers is estimated around 3,500, and they are often employed to pay back the foreign commanders who demand rewards for the support given to the rebels during the war.

Amnesty International now fears a wave of religious clashes: Seleka forces are mostly made of Muslims, and in the past months they have repeatedly assaulted Christian churches and villages. The Christian militias, as a consequence, have started retaliations against Muslim communities. “The African Union in July committed to sending to the Central African Republic 3,400 men to protect civilians - explained Byaruhanga –but less than a half have arrived: a number which is totally inadequate in a country larger than twice the territory of France”. The Central African Republic has been the scene to clashes since December 2012. The situation though dramatically worsened in March this year, then some rebel groups ousted President François Bozizé to replace him with their leader Michel Djotodia, pulling the country in a state of semi-anarchy.

In the opinion of John Ging, high UN Officer, more than a half of its inhabitants need humanitarian assistance and thousands people depend on the healthcase and food provided by the humanitarian organizations. Seleka militants ofte attack the assistance centres: Amnesty reported the case of assault against an orphanage, during which rebels shot wildly at the children frightening them and then stole computers, food stocks and vehicles from the facility.  Following these reports, the United Nations have been pondering whether to step in by taking the lead of the peacekeeping force that was sent by the African Union in July.