Vladimir Kurtev Righteous among the Nations

for helping rescue the Bulgarian Jews 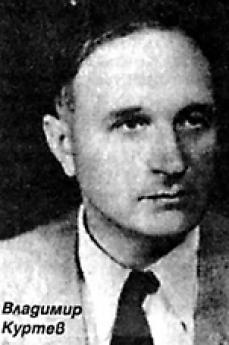 The Holocaust memorial in Jerusalem posthumously awarded Bulgaria's Vladimir Kurtev with the title of Righteous among the Nations for protesting against the plan to deport the Jews, thus helping rescue the citizens of Jewish faith of an entire nation.

THE JEWS RESCUE
Kurtev was born in 1888 in Pleven. He taught in Kyustendil and was very tightly connected to the Jewish community. Like many Jews he was a member of the Macedonian revolutionary movement. On 22 February 1943, an agreement was signed between the Bulgarian Commissioner for Jewish Questions, Alexander Belev, and Eichmann’s representative, Theodor Dannecker. The pact provided the deportation of 20,000 Jews from Bulgaria and was approved by the Country's government on 2 March 1943. Two days later started the preparations for the deportation of the Jews from Macedonia and Thrace, areas under Bulgarian influence. Vladimir Kurtev hears of the upcoming deportation during a reception in honour of the Germans and informs his Kyustendil friends.
A delegation formed by 4 citizens - Vladimir Kurtev, Asen Suichmezov, Petar Mikhalev e Ivan-Christov Momchilov - reached Sofia to ask for the repeal of the decree. As soon as the delegation left for Sofia another empty convoy designated for the Jews was put on track at the Kyustendil station.

In the morning of 9 March in the Bulgarian capital, the delegates met with Deputy speaker Dimitar Peshev. who did everything possible to prevent from the deportation and was therefore removed from its position. Kurtev, Peshev and Mikhalev met the Minister of Internal Affairs Gabrovski and asked him to halt the deportation.

Gabrovski attempted to deny the existence of the deportation plans, but ma urtev retorted that he’d heard about them with his own ears, and threatened the minister with Macedonian “sanctions” if the edict wasn’t revoked. The efforts of the delegation, as well as other action taken by the head of the Holy Synod, Metropolit Stefan and others, paid off, and the arrested Jews were freed. Nonetheless the deportation of Macedonian and Thracian Jews did not stop and nearly 11,000 people were sent to the death camps.

Metropolitan Stephan was awarded the Righteous title in 2001, Dimitar Peshev and other 3 delegates in 1973 and 1991. Kurtev's fate has remained unknown: he disappeared in the aftermath of war, perhaps killed by the Bulgarian Communists. Yad Vashem awarded him the Righteous title on 3 March 2010.

Kurtev named Righteous among the Nations in the www.yadvashem.org Website

THE MAN WHO STOPPED HITLER
The story of Dimitar Peshev and the Bulgarian Jews is recounted in the book by Gabriele Nissim L'uomo che fermò Hitler, published in Italian by Mondadori.
presentation