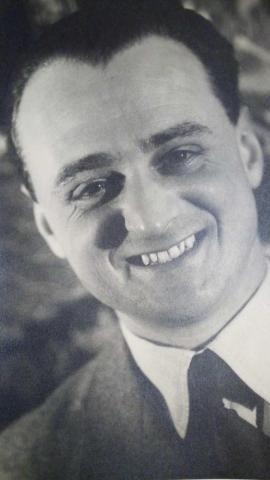 There was a mystery in my family, my uncle Ettore, Ettore Barzini, my father's brother, who died in Mauthausen. No one had ever told us about him, there was no photo, no trace, we didn't even know why he had been deported. So, as a boy, I had fantasized about him. Who was this uncle? I imagined him very different from my father, who was a concrete, strong-willed, practical man. The only detail that my father had let out of his younger brother was an adjective: "dreamer". Kids like dreamers, so my uncle remained inside me. Then, and I don't know why, a couple of years ago, I started thinking about him again. I went to the State Archives in Rome, where the memories of my family were kept (both my grandfather and my father were famous journalists), and I found his letters. They were few, ironic, distracted, almost all directed to his mother or sister. And we quickly became friends. He had a voice I recognized, a way of taking things I understood. He was a second child like me, he hadn't picked up the weight of the world on his shoulders like my father and my brother had. Cadets. Those who in the Middle Ages were knights of fortune and were defenders of lost causes and protectors of the defenseless.

From the letters and a few other traces, I reconstructed his life. He had studied agronomy in Cornell, USA, while his grandfather ran a newspaper in New York (it happened in the early 30s), then he had worked in Jamaica and Somalia, growing bananas. In Somalia he had collided with the fascists who fired him. Back in Milan he helped his family in crisis, his grandmother had died of cancer in 1941, leaving her children and husband completely disoriented. Ettore took care of them. Meanwhile the war was becoming more and more dramatic. In Greece, Albania, Russia, East Africa, thanks to the militarism of the Duce, the Italians, when they did not end up in some prison camps, were dying in half the world. Ettore was working as a site manager and helped in the evictions of bombed-out houses, saving many lives and getting himself a medal for civil valor. From there, to enter the Resistance to fight those who had thrown the Italians into the tragedy, was a simple step for him. Like his companions, Ettore wanted to work together to create a just world. In the family they called him Don Quixote, the usual Don Quixote. He helped as he could, small actions of a minor defendant, the transport of a clandestine radio, the delivery of a package of false identity cards, the accompaniment to Switzerland, through the mountains, of a Jewish family with three children, who ran away from the horror of Milan in order not to be deported. When the SS went to look for him, he wasn't there, but my grandfather went in his place. They held him hostage for an afternoon. Ettore, to bring out his father, who in reality was not risking anything, went to surrender. He didn't want anyone to pay a price, even the smallest one, because of him. They took him to San Vittore, he was tortured and deported to Fossoli, the camp in Emilia where many prisoners passed to be sent to die in the north, finally to Mauthausen, and Melk, where he died in March 1945, two months before the end of the war.

Before writing his story, I had some doubts: “But what am I doing? Pulling out a buried story, dealing with the secret facts of my dead relatives, necrophilic stuff, and then, by what right could I judge them for having erased Ettore? " As I wrote, the scruples disappeared. Memory was a beautiful thing, and not a deadly act, I was bringing back to life a person who deserved it. Mine was a refund. As for the mystery that he had been erased for, it had to do with a feeling that so many survivors experienced during those years, a secret sense of guilt for not having died too.