The first Garden of the Righteous in Germany 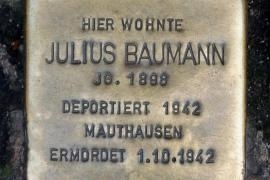 The stone dedicated to Baumann in Stuttgart

STUTTGART – On Tuesday 28th May, at Johann-Friedrich-von-Cotta-Schule high school in Stuttgart, we inaugurated the first Garden of the Righteous in Germany by planting a tree in honour of Julius Baumann, an extraordinary personality of the world of sports who sacrificed his life to give dignity and joy to Jewish children during Nazism. The Garden has become a reality on the initiative of Kickers Fanproject, a Stuttgarter Kickers supporters association, together with Cotta-Schule school teachers and students, and has been created in collaboration with Gariwo, following the model of Milan Monte Stella Garden. An extraordinary synergy between apparently very different entities, rewarding the passionate and committed effort on memory made by Cotta-Schule school, and in particular by Professor Martin Gansen, and contextually by supporters of the Kickers football team.

The Italian Consulate General in Stuttgart has supported the project of the Garden of the Righteous at Cotta-Schule school since the very beginning, and Consul General Massimo Darchini took part in the inauguration ceremony, along with Rainer Lorz and Niko Kleinmann, members of Stuttgarter Kickers management, as well as many supporters and students. Pip McCosh, Julius Baumann’s grandniece, has been the guest of honour. She came from New Zealand, with her husband Andrew, invited by Stolperstein Initiative, an association that has dedicated a stone to Julius Baumann.

The idea of the Garden came after the conference I held in January with my friend Francesco Ferrari, Professor of Jena University and author of valuable works on Martin Buber, on the occasion of the Remembrance Day. This initiative was promoted in collaboration with Stuttgart Italian Cultural Institute (thanks, in particular, to Cesare Ghilardelli) for the students of the high school Italian teacher Giuliana Tosarello. We would like to thank the school principal, Birgit Jäger-Gollwitzer, who was immediately enthusiastic about our proposal to create a Garden of the Righteous in the prestigious school of the city.

But who was Julius Baumann, the Righteous we honoured in Stuttgart? Jew, born in the Swedish capital in 1898, he gave up a visa for England in 1939 that would have saved his life to take care of his community, and in particular of poor people and children, until the end. Baumann was a referee of Stuttgarter Kickers in the 20s and 30s, when it was one of the most successful teams in southern Germany. After the adoption of the Stuttgart Declaration of 9th April 1933, envisaging the exclusion of Jews and Marxists from football clubs of southern Germany, Baumann had to leave the club. In the following years he was involved in the Jewish club Hakoah Stuttgart and helped people in need in the Jewish community of the city. He was killed in 1942 in Mauthausen concentration camp.

He made the presumably difficult and painful decision to remain in Stuttgart because he had promised the Jewish community to organize a summer camp for children to convey them dignity and courage. And for the little ones, in the darkest years of German history, Baumann created a little open-air paradise of freedom in Feuerbach valley: the Jewish sports field. With his own hands and long working hours, he built a modest children's pool that he was never tired of emptying and filling with fresh water using a bucket. He was one of those rare people who, seemingly defenceless, could still help others with a burst of courage. During Nazi persecution, Jewish citizens were forbidden to go to the cinema or to the theatre. Baumann inaugurated then what he called “the coloured hour” especially for them. He organized a sort of variety show in Hospitalstrasse 36 gymnasium to allow young people of the community to participate and have fun. Aside from a Gestapo official, according to the chronicles of the time, the audience only included Jewish people from Stuttgart.

Despite Gestapo’s pressure, the brave Julius Baumann went on actively promoting cultural and sporting activities for the Jewish community. It is tragic and painful to recall how he was forced to participate in luggage transport during the first expulsion in which Jewish citizens were indirectly involved. It was 1st December 1941: over 1,000 Jews from the region were deported to Riga, including his sister Berta and her husband Ernst Levi. In 1941 and 1942 all Jewish citizens had to move to the so-called Judenhäuser, or to a ghetto. Baumann pretended he was a furniture carrier using a car, but actually gave food to people hiding them in a gymnasium. Later, in 1942, his “Aryan” assistant was captured. After such arrest he betrayed Baumann, who was later captured and soon deported. According to sources, the Gestapo man who had to arrest him was not enthusiastic about that. He told him: “Damn it, Julius, why did you end up into something so stupid? I have to arrest you now!”. Baumann was initially offered what appeared to be a possible way out, as he knew Alfred Amthor, head of Gestapo Central Office in Stuttgart. Amthor was a Kickers former athlete. But his influence was not sufficient to save him.

Julius Baumann was first taken to Welzheim and later deported to Mauthausen concentration camp. He then died there. The official announcement of 1st October 1942 is the following: “killed while escaping”. Only a week had elapsed since his arrest when his ashes returned to Stuttgart. His urn was then placed in the Jews section of Pragfriedhof city cemetery. His tombstone reads: “He gave his life for the Jewish community”. In front of his house, in Eberhardstrasse no. 35, a stone commemorates this extraordinary person.