The courage of music

Toscanini honoured as Righteous in Rome 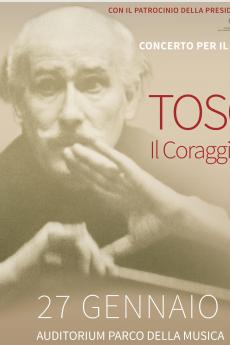 A detail of the concert's flyer

On 22 January at noon, in Rome, at Parco Auditorium della Musica - Santa Cecilia, within the commemorations for Holocaust Memorial Day, a tree will planted in honour of Arturo Toscanini, the great Italian musician who directed for the first time an entirely Jewish orchestra in Palestine, formed by artists whom he personally had helped flee Europe as it had fallen prey of Nazifascism.

In the special tribute that the city of Rome, the Jewish community and important cultural institutions including the Ministry of Culture run by Dario Franceschini, will pay to the Maestro, also Gariwo chairman Gabriele Nissim will take part.

The Milanese writer said: "It is of Moshe Bejski that I thought, when I reflected on Arturo Toscanini’s behaviour towards the Jews – events that are eventually brought back into the spotlight by the concert that will be dedicated to him on Holocaust Memorial Day. Toscanini, a staunch anti-fascist, had no power to stop fascism and the anti-semitic laws and for how disgusted he had to move to the United States, but he put all his fame and prestige at the disposal of Bronislaw Huberman’s project to create an orchestra in Palestine, thus taking a hundred Jewish musicians into safety. That orchestra was the symbol of moral resistance against Nazism. This is why Toscanini wanted to direct it on 26 and 27 December 1936 in Tel Aviv..

Someone could argue that Toscanini did not risk his own life to help the Jewish musicians and his deed cannot be compared to that of Schindler or Perlasca, but Moshe Bejski strove for all his life to teach people that the Righteous men are no heroes or saints called to self-sacrifice, but rather and more simply, they are people who respond to indifference and take on responsibility for the persecuted in the gloomiest times of the history of humanity."

On 27 January Arturo Toscanini will be also honoured by the great concert conducted by Yoel Levi that comprises, so reads the press release of the Accademia di Santa Cecilia, “the very bulky programme executed by the debuting Orchestra of Palestine on the evening of 26 December 1936, under the conduction of the Maestro. Here it is: Symphony from La scala di seta by G. Rossini; Symphony n.2, op. 73 byJ. Brahms; Symphony n. 8 Incompiuta  by F. Schubert; Notturno and Scherzo from Einem Sommernachtstraum by F. Mendelssohn; Ouverture from Oberon by C.M. von Weber”.

International Holocaust Remembrance Day was established by the United Nations in 2005 on the sixtieth anniversary of the end of World War II: the choice fell on the date of 27 January because on that day, in 1945, the Red Army had entered the Nazi lager of Auschwitz. “Strangely”, it was made clear by the Accademia di S. Cecilia, “27 January is an important date also in the annals of music because on that day in 1756 Wolfgang Amadeus Mozart was born and in 1901 Giuseppe Verdi died".