upon invitation of the Garden of the Righteous Association 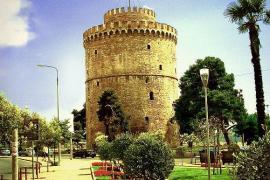 The White tower in Salonicco (Photo by Wkicommons)

The show devoted to Consul Guelfo Zamboni who took hundreds Jews into safety will be at Teatro Franco Parenti in Milan on 22nd February.

The initiative falls within the programme of commemorations scheduled by the Association for the Milan Garden of the Righteous, formed by Milan City Administration, the Jewish Community and the Gardens of the Righteous Worldwide Committee-Gariwo.

Moreover we will dedicate Guelfo Zamboni a tree in the virtual European Garden of Thessaloniki, within the European Project WeFor - The Righetous against the forms of Totalitarianism. European identity and conscience on the Web.

Entrance upon booking. In order to book a place please write an e-mail here by specifying your name and surname, the address to which we shall send the personal invitations and a phone number to contact you if needed.

I was fully aware that the certificates were forged. I deliberately released them to people who had nothing to do with Italian citizenship. What ought I to have done to rescue them?
Guelfo Zamboni


THE SHOW
Original play by Ferdinando Ceriani, Gian Paolo Cavarai and Antonio Ferrari on the genocide of the Salonika Sephardic Jewish community perpetrated during World War II. In those months of 1943, which witnessed the complete annihilation of this community, Italian Consul in Salonika Guelfo Zamboni started a personal diplomatic struggle to save first the Italian Jews and later as many people as possible from Nazi fury by giving them provisional Italian passports in order to make it easier to them to move to the Italian occupation zone. Salonicco 43 is produced by Fernando Ceriani and stars Massimo Wertmuller (in the role of the Consul) and Carla Ferraro. The music and songs are written and performed by Evelina Meghnagi accompanied by musicians Domenico Ascione and Armando Vacca. The play, based on the official documents issued by the Consulate in those months, the survivors' testimony, and careful historical research, brings the exotic sound of Ladin, the language of Sephardic Jews, back to life.

THE DATES OF THE PERFORMANCES

The show will performed again in Budapest, Vienna and Trieste at the end of May.