Moshe Bejski, the judge of the Righteous 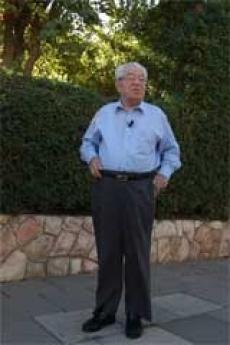 Gariwo presents Il Memorioso, the show dedicated to Moshe Bejski, with two unpublished portraits of the Garden of the Righteous in Jerusalem.

We present you with the testimony of Marc-Henri Fermont, who is the son to the cousin of Erica Eifermann, Moshe Bejski's wife:

"It is only in the early nineties, when Thomas Keneally’s book was published that we finally got the whole story. On the other hand, Erica’s true story during the war in Czernowitz was never told in any details to us, besides that her family got a special resident permit which protected her. It is remarkable that both Moshe and Erica’s lives were rescued by prominent Righteous, namely Oskar Schindler for Moshe and Trajan Popovici, Mayor of Cernauti, for Erica. Trajan Popovici drafted a list of circa 20.000 Jews who survived the Holocaust in their home town. In 1969, Trajan Popovici was recognized by Yad Vashem as a Righteous.

A major event for us was the first showing of the film Schindler’s List on March 8th 1994 in Milano, which Moshe and Erica personally attended. They were guests of honor, as it is shown on the photos and in the newspaper articles of the time. Before the film was shown in the evening, there was a press conference in the cinema Odeon where Moshe was subjected to a detailed questioning. One journalist asked Moshe the following question “Is it true that Holocaust survivors were not well received in Israel, when they landed there?” I was shocked and thought the question was indecent. Moshe calmly answered, as if he was prepared to such a question. He said that Israelis were in reality saying to the survivors “How come you survived when my relatives and friends all died?” “How were you able to stay alive, when everybody else we know was murdered?”

In memory of Moshe Bejski

In 2007 cousin Carmela Rubin commemorated Moshe Bejski in a ceremony in Massuah, the Holocaust Research Institute founded precisely by Bejski in the kibbutz which had welcomed him when he had arrived in Palestine.

" As girls we knew that Moshe had been in a concentration camp, but the first time I ever heard about it first-hand was when he was witness at the Eichmann trial in 1961. As I was still under 16 years of age, and was not allowed to enter the court, I had to make do with watching a televised version screened in the Ratisbon in Jerusalem.
When the court session was over I rushed to meet my parents and Moshe and Erika and we all went to our cousin Rutie’s apartement.
I will never ever forget the sight of Moshe on that day. His complexion grey and blue, he looked like a dead man walking, as though his blood had spilled out of his veins.
I realized that the need to allow his memories to surface, literally pulled him back to hell.

No wonder then that even decades later, when Tami and I tried to convince Moshe to record his past experiences, he declined. He was afraid he wouldn’t be able to cope… if I had children, he openly admitted, maybe I would feel obliged to do it… “