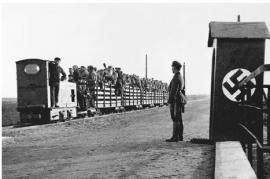 Spring, 1943.   The pro-Nazi government in Sofia is preparing once again to deport Bulgaria’s Jews to the Third Reich.   Their fate would be the gas chambers in German-occupied Poland.

This was the regime’s second attempt.   Earlier, in March that year, resistance forced a postponement in the deportation plan.   The deputy chairman of the National Assembly, Dimitûr Peshev, circulated a petition urging the government to desist.   He and 43 signers helped win a delay for some victims.  Thus, only Jews from the recently-annexed parts of Yugoslavia and Greece went to their deaths.   The rest, about 49,000 in “old Bulgaria”, remained alive but under the sword of Damocles.    Meanwhile Peshev was censured for this brave gesture, his career ruined as a warning to those who dared protest.

Meanwhile Germany kept demanding Jews.   Bulgaria’s “Commissariat for Jewish Affairs” pledged to supply them.  Lest the Nazi masters lose patience, the Commissariat revised its plan to comply with the Final Solution.  This time all would have to go smoothly without meddling from civil society or righteous politicians.   A phased process would start in late May.  September 30 was the new target date for a country “free of Jews”.    Most able bodied Jewish men were already away from the cities, in forced labor.  While they toiled under guard, their families could be evicted, sent to makeshift ghettos in other towns, and then deported.   Commissariat agents would seize all assets and household property from the empty apartments.   Then the men in the labor units would follow separately to meet their end in Poland.   The blow was to fall first on the Sofia ghetto, home to about 25,000 Jews, half of those still alive in the country.

To accomplish all this, the government had granted plenipotentiary authority to the Commissariat.  Parliamentarians like Peshev had no recognized role.   As needed, the Commissariat could call on the railways, police, and army to assist.   The army had already rounded up the Macedonian and Greek Jews, dragging women, children, and the elderly out of their homes, loading them onto railway freight cars.    Orders were orders, and military men are expected to obey.

Sometimes, however, orders can conflict with other orders.  Or with regulations.  Or human decency.

Colonel Tsvetan Mumdzhiev, a Bulgarian career officer, commanded the labor battalions.   The men he led included Turks, Serbs, and Jews, that is, the ethnic minorities not trusted to bear arms.   Bulgaria’s Jews had served as regular soldiers until 1941 but under German pressure their military status was withdrawn.   Now these unpaid former soldiers, former teachers, tradesmen, artisans and professionals slaved to construct roads.  Some units wielded shovels to “correct” the course of a river.   However dirty the work, they had their jobs to do, and the Colonel had his.

A man in his mid-fifties, Mumdzhiev had learned from experience: Whatever the job, people work better when they feel appreciated.   So he aimed to improve conditions.   Antisemitic junior officers who had insulted, beaten, and extorted from the conscripts were disciplined.   As far as Mumdzhiev was concerned, all labor troops were still comrade soldiers, entitled to dignity according to army regulations.   Dignity meant adequate rations, reasonable work shifts, and medical treatment at military clinics.   That could mean the difference between life and death when the men were injured or contracted malaria, which happened often.   Dignity could also mean emergency leave to attend to urgent family matters.   After all, approval of furloughs remained a commander’s prerogative.

The “Commissariat of Jewish Affairs” duly supplied the urgent family matters.  What could be more urgent than losing all one’s property and having one’s family evicted, then deported to an unknown fate?   Except that their intended fate was no longer a mystery.   By May 1943 everyone in Bulgaria suspected the awful truth: Deportation meant death.   And according to bureaucratic routine and normal human decency, the imminent death of a family member constitutes an emergency, adequate reason for granting leave.

Colonel Mumdzhiev took action.  He acted as if the Jewish labor conscripts were still soldiers although, formally, they were not.   He approved family leave to those men who requested it, and authorized subordinate officers to do the same.   Hundreds of men left the labor camps with valid passes.    Many others simply left.   What followed is one of the “What ifs?” of History.    What if their families had been deported?   Would these men have meekly returned to the labor units?   Or is it more likely, and entirely more reasonable that they would have deserted to join the partisan bands fighting against the government in the countryside?

The departure of so many laborers upset the road building work schedule.   Worse still for the government, it presented a dilemma.   Deporting the Jews according to the Commissariat plan could seriously destabilize security.   And, with trains and river barges ready to convey their human cargoes to slaughter, the deportations were put on hold, suspended.   Then after awhile, deportation was quietly cancelled.   German diplomats were told that the Jews “were needed to build roads”.    Gradually most of the forced laborers drifted back to their units.   They, and their families, amounted to hostages for each others’ good behavior.  Hostages in destitute misery but alive, and still living in September 1944 when Bulgaria switched to the Allied side.   The Holocaust in Bulgaria was over.

A trial of perpetrators followed.   Indicted along with Commissariat officials was the commander of the forced labor battalions.   The men he furloughed had not forgotten.   They petitioned the court to free Mumdzhiev.   One petition reads:  “He treated us in a fatherly way”.   The court acquitted the colonel, who passed into the obscurity of dusty archival pages.

What makes a Hero?  What motivated Mumdzhiev?   Coming from the ancient city of Plovdiv, this was a man of urban sophistication.   Without doubt he had known Jews as neighbors and later as comrades-in-arms.   As a commander he ignored their debased status and treated them, still, as associates.  He acted as a human being and a professional with a job to do.   He interpreted regulations as he saw fit, stretching to the limit of the possible.   It won him no medals, no public laurels, no exalted status in the decades that have since gone by.   No streets or schools named in his honor, no public holidays, no face on a national postage stamp.

Oblivion.  If this is a Hero, let History judge.