The Islamic associations at the Garden of Milan 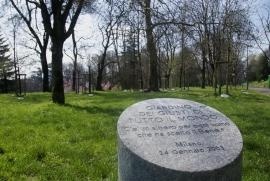 On the occasion of the International Holocaust Remembrance Day, Gariwo and the Young Muslims of Italy, together with Sumaya Abdel Qader, organized a visit to the Garden of the Righteous Worldwide of Milan, Sunday the 29th of January 2017.

This have been the response to the call that Gabriele Nissim launched “for a great signal of moral peace and cohabitation in our country and in order to assert that terror represents not only the attempts of destruction of the cohabitation between men, but also of the same spirit that brings us to believe in a transcendent being representing the best parts of human nature. When you kill and find excuses to accomplish barbarous acts in the name of God, as have written Etty Hillesum before she died in Auschwitz, you kill that same God. This is why people, in the face of adversity, are called to protect God from those who would like to transform Him in the worse of criminals. God speaks to the world with the good deeds of men, not with hate, assassinations, eliminations of the other form the earth.”

The Garden of the Righteous of Milan is a universal place of memory of good, where are remembered Italians, Jews, Armenians, Russians, Arabs that have been able to rescue the other surpassing every ethnic, national, religious obstacle because the most important homeland of men is the common humanity.

“As soon as Nissim, months ago, introduced me to the project of the Garden of the Righteous, I have fallen in love with it because I share the same spirit and the same long-term outlook”. This is how Sumaya Abdel Qader, Councillor of Milan (PD), have received the proposal of the president of Gariwo and have involved the Young Muslims of Italy-Milan. “We wanted the visit to the Garden to coincide with the International Holocaust Remembrance Day in order to send a stronger message: our proximity with the Jewish community in the moment of a painful memory and the desire for openness, that is desire for listening, debating and supporting every initiative aimed at safeguarding the Creation and Humanity. This is also because we want to participate in the battle against anti-Semitism and any form of discrimination. The Islamic communities have finally become stable in Italy. Feeling stable means stepping out of the emergency mentality that aims primarily in answering only our most basic needs. It means starting to look around and want to interact. It means becoming an integral part of the country. This is true particularly because of the new generations”.

For this reason the participation of the Young Muslims is even more important to the initiative. “Through our visit to the Garden of the Righteous – declared Farouk Abd Allah, president of the Young Muslims Italy-Milan – we want to reaffirm our proximity to the Jewish communities and to all populations that have been victim of atrocities; we want to reiterate our commitment to oppose every form of injustice, discrimination and infringement of human dignity. We will continue to support every initiative toward peace, dialogue, and bridge building. The visit to the Garden is a practical act as well as symbolic. Let us do the mission that Gariwo promotes: remembering the righteous of the world, the men and women that have helped the victims of persecutions, protected human rights, safeguarded human dignity, testified in favour of truth against the attempt of negations of the committed crimes”