Founder of OSCAR, "rebel for love" and Righteous at the Milan Garden since 2014 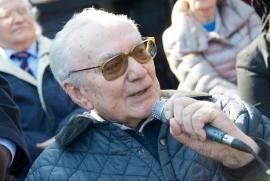 Passing away at age 96 of father Giovanni Barbareschi, founder of OSCAR, priest and "rebel for love", and Righteous at the Garden of Milan since 2014.
“Either you live as you think or you are slaves. I wish you to be able to react in the face of today's slavery: yesterday they scared us with rifles, today they try to condition you with a velvet hand, by they strangle you all the same. The humanity is not divided into believers and non-believers, but into enslaved and free people”. This was is heartfelt and moving call for the young people who were there on Monte Stella Hill on the Day of the Righteous 2014: “Youths,  fall in love with freedom. Only this way you become men and women”.

Born in Milan on 11 February 1922 into a bourgeois family, with the armistice of 8 September 1943 he decided to support the Resistance. With other friends of the Catholic associations, he took part into the editing of the underground newspaper "il Ribelle" (the Rebel). Together with three other priests who were all a group of friends, father Enrico Bigatti, father Andrea Ghetti and father Natale Motta, he was among the initiators and active leaders of OSCAR, (Organization for the Catholic Rescue of Wanted Antifascists) whose first meetings took place at the San Carlo College of Milan. The organization managed to take to the rescue to Switzerland thousands of people, providing activists and other receivers - antifascists, Jews, allied prisoners who had remained behind the lines - the forged documents necessary to circulate until when they'd expatriate. They were joined also by some underground scouts of the "Aquile Randagie" (Stray Eagles).

On August 10th, 1944, 15 partisans were shot in Piazza Loreto by operatives of the Brigata Muti, a fascist police organization. Their bodies were left in the square. The deacon Barbareschi proposed a procession on the site of the shooting to Cardinal Schuste which was rejected for security reasons. However, he was invited by the Archbishop to bless and collect the personal effects and messages of the victims for their surviving friends and family. Three days later, he was ordained a priest. Two days after this, he was arrested and condemned to San Vittore where he was tortured by the fascists and the SS. He resisted until the Cardinal intervened for his liberation.

After resuming his partisan activity in Valcamonica as a chaplain with the Green Flames, he was again arrested and was sent to the concentration camp of Gries (near Bolzano). During a transfer to another camp, he managed to escape. In the following days, he returned to Milan and strived to make sure that, in the days following 25 April 1943, the torturers of the SS and the fascists who had tortured and killed mercilessly for 20 months were not killed or lynched in revenge, but rather handed over to the Allies to be regularly tried.

After the war, Barbareschi worked with Don Gnocchi to assist the maimed. He was a teacher beloved by colleagues and students at the Liceo Classico Manzoni in Milan, for several years he ran the Religious House of the Motta Alp in Madesimo. With Cardinal Carlo Maria Martini he was one of the great personalities behind the "cathedra" for the non-believers at the University of Milan for an honest, open, conciliating encounter among the different faiths and philosophical beliefs.

Despite his advanced age, he strives to retell these parts of our history, emphasizing his love for freedom and intervention for the salvation and respect of other lives.

He has received many awards, both civil and religious, including the Silver Medal of the Resistance, the certificate of merit of the Israeli Community of Milan in 1955 and more recently in 2011, the prestigious Ambrogino d’Oro by the Municipality of Milan.

Since 6 March 2014, Father Giovanni Barbareschi has been dedicated a tree and a stone at the Garden of the Righteous Worldwide of Milan.

Ceremony at the Garden of the Righteous of Milan 2014