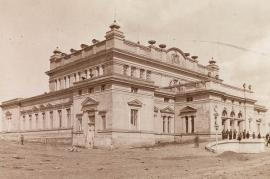 Bulgarian Helsinki Committee is to hold in the Bulgarian capital the meeting Facing our past, on 5 and 6 October at Hotel Radisson in Narodno Sabranje square 4.

Participation of Bulgarian, American, French and Macedonian scholars. For the first time the relatives of the victims of the Holocaust killed in March 1943 during the Holocaust in Skopje, Ksantis, Kavala and Sofia, will personally tell about their loved ones' fate.

Special guest is Gabriele Nissim, author of the book L'Uomo che fermò Hitler (The man who stopped Hitler) dedicated to the figure of Dimitar Peshev, the Vicepresident of the Bulgarian Parliament who ordered to call off the deportation of the Jews from the inner territories of Bulgaria, thus rescuing its 45,000 Jews. The Jews from the areas occupied by Bulgaria, Thrace and Macedonia, instead were sent to Auschwitz from where they did not come back.

Participation of Lea Kohen, former ambassador of Bulgaria to Belgium, who will present her book You believe.

The plight of the Jews from Thrace and Macedonia will also be recalled with the projection of the documentaries Borislav and the Balkans by Julius Stoyanov and Empty Boxcars by US writer Ed Gaffney.

On the occasion staging of the exhibit New sources for Holocaust with much material from the most important Bulgarian national archives.

The report by Gabriele Nissim

The conference is designed to foster an earnest and deep debate about the historical responsibilities of Bulgaria for the deportation of the Jews from Thrace and Macedonia during the Holocaust. Gabriele Nissim pointed to the greatness of Dimitar Peshev, the Vicepresident of the Bulgarian Parliament who rescued the 50,000 Jews of the inner territories of Bulgaria. Following is an excerpt of his speech. To read the full text please download the pdf file from the box below.

"What happened in the Forties of the past century is a very clear representation of the banality of evil, described by Hannah Arendt in a masterful manner, as she noted that human beings can perpetrate serious crimes not because they are devilish and bad, but because they lose their prerogatives of thoughtfulness and judgement. Evil thus presents itself as thoughtlessness. Under extreme circumstances, which are typical of totalitarian systems, moral conscience does not perform because those who become passive bystanders of evil believe it is their duty to obey, comply with the laws in force and follow the political and ideological orientation of power.
Paradoxically, breaching this order becomes a guilt unless it is supported by thoughfulness and imagination.

This is exactly the core of Peshev’s greatness.
When his friend Jako Baruch, a few hours before deportation, invites him to make a move in favour of the Jews who had already been gathered in the tobacco stores to be sent to Poland, Peshev faces two possible options:
behaving like Eichmann and all those who abetted the final solution, by purporting that an honest citizen had to comply with the state orders and the law in force even though he did not like them. This meant acting for the supreme Good of Bulgaria, by obeying to the crown’s government and not feeling embarassed when faced with the calls for help coming from the Jewish community. In this case he would have pretended not to know.
Or else, he would have to question his choice and put himself in the Jews’ shoes, by imagining their possible suffering.

In this case his judgement would have not have been based on pre-established rules, but only on his capability to think by himself. This is what Hannah Arendt defines as reflective judgement, i.e. everybody’s capability to express an aesthetical judgment (I like it or not, it is beautiful or ugly) about everything, without basing their evaluation on the general political orientation.
Peshev faced a quandary, then followed this latter path".