A “hopeless" kind of heroism? 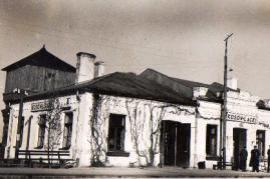 70 years ago, three chiefs of the Judenrat of Kosow Huculski, a small shetl at the slopes of the Carpatian Mountains in Eastern Galitia, were the protagonists of a deed of extreme sacrifice that deserves to be remembered on the eve of the first European Day of the Righteous. The village was inhabited by nearly 2,500 Jews, who amounted to nearly 80% of the population, plus 1,500 Jews that had been forced to moved there from the neighbouring villages.

After the Soviet invasion, the Hungarians occupied the country. Later they were joined by the German troops which set up a Jewish council (Judenrat in the Nazis’ language). As it had happened in many towns in Poland, the council’s purpose was to control the population in the sight of extermination. In Winter 1941 a German commando killed 2,088 Jews from Kosov on a neighbouring hill. The survivors were aware of the upcoming disaster. Hence, in Spring 1942, when on the eve of Pesach – the Jewish Easter – the inhabitants heard that Ukrainan and German policemen were marching into the village once again, they decided to hide in the basements and in the near forests to escape death. Thus the shetl turned itself, from dawn to dusk, into a ghost town.

The village chiefs then made a decision. Instead of following the remaining Jews in their desperate runaway, they choose to wait for the Nazi sto try and negotiate with them. They were fully aware of what would happen to them, but they thought this was the only way to try and rescue the rest of the population. Resulting from a written piece of testimony, the four leaders thought that the Germans would find it suspicious to find the village empty. In that case they would have immediately set the houses on fire and the majority of the Jews would have been burnt alive. Soon before the Nazis’ arrival, one of the four leaders gave up out of fear and his three companions, after a dramatic discussion, incited him to hide, and took the charge whole sacrifice upon themselves.  The village chiefs succeeded in their desperate attempt nonetheless. The Nazis, after killing them, left the village and went to perpetrate their mass murders to the neighbouring village of Kitov.

With their heroism, the three leaders managed to protect the lives of the inhabitants of Kosow, at least for some weeks. In fact, after 6 months, they came back and killed all inhabitants. This episode holds a great exemplary value for at least three reasons. It shows how hurried and inaccurate the analyses of Hannah Arendt and Zygmunt Bauman are. They considered the Jewish councils as tools in the hands of the Germans, led by chiefs who would always try to save themselves with great harm to the others.

The history of the Judenrat was varied and it is a mistake, as Yehuda Bauer reminds us in his excellent book Rethinking the Holocaust (Yale University Press), to make general assumptions without considering the whole range of the behaviours of the Jewish councils. Secondly, the heroic behaviour of the three Kosow leaders, who sacrificed themselves to protect the life of the Jewish community, albeit for a short time, shows that Yad Vashem is wrong in its refusal to remember as Righteous the Jews who spent their lives to rescue human lives, and without whose courage many rescue deeds would have never happened. The Jewish memorial in Jerusalem preferred focusing on the deeds of Gentiles to emphasize those who was not indifferent to the fate of the persecuted; but this way, albeit with the best intentions, they failed to honour the many Jews who tried not only to resist, but also to help their brothers in the course of persecutions.

Kosow leaders would deserve a tree in the Avenue of the Righteous, and instead run the risk of being forgotten unless we recognize the great moral value of their resistance. There should not be fences between the Jewish Righteous and the Righteous Gentiles. There is though a key point in these events: the great moral value for the whole humankind of a seemingly “helpless” gesture. In fact we know, from the course of the events, that the leaders of the shetl postponed the announced death of the village inhabitants of a few months only.

Nonetheless, like the resistants of rhe Warsaq ghetto who died in the insurrection against the German without having any hope to win, and only to defend their own human dignity, also the Kosow heroes are extraordinary examples who should be remembered and whose story should be told for the sake of Europe’s future. This is precisely on the goals that we have set  by establishing the European Day of the Righteous: honouring these brave people who were seemingly defeated by the Nazis, keeping their memory, means turning them into winners for the future generations.   We will remember them on 6 March because by defying all logics under Nazism they have rescued the hope in the human being.