at the Singer Festival of Jewish Culture 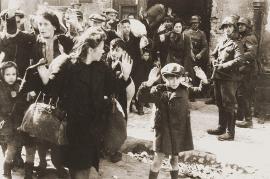 Famous picture of the Warsaw ghetto (by unknown author)

On 31 ceremony of awarding the title of Righteous among the nations to 7 Poles who rescued Jews during second world war.

Agnieszka Kaniut and Maria Kałuża from Chorzów took care about the young sisters Ester and Tzipora Spiegel, by hiding them from the Nazi executioners amidst plenty of risks and difficulties.

They have been posthumously honoured, as were the members of the Matacz family - Leokadia, Marianna, Stefan, Helena and Mieczysław, from Warsaw - who gathered their forces to rescue Ewa Feldsztein-Wasserman and her little son Stefan, who had run away from the ghetto of the Polish capital.

The ceremony was held in the presence of the Israeli Ambassador to Poland Mr. Zvi Rav-Ner and high school students of the Israeli town of Haifa. Survivors have held moving speeches in which they have thanked the Righteous and their families.