an independent journalist in the Rwandan Genocide 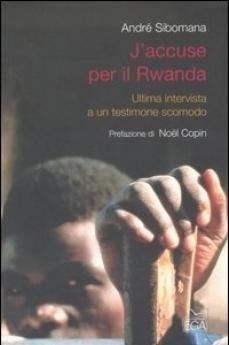 André was born in 1954 in the town of Masango, in Rwanda. He trained at the Nyakibanda seminary, was ordained in 1980, studied journalism in France, and died at Muyunzwe on 9 March 1998, after a long illness.
As well as being a priest and journalist, he was also a human rights activist and at the end of 1990 helped form the ADL, (Rwandan Association for the Defense of the Rights of the Person and of Public Liberties), the aim of which was to record details of all human rights violations and to file them in a public report.
From 1988 André Sibomana was editor of Kinyamateka, a Roman Catholic newspaper, founded in 1933 by the White Fathers and owned by the Episcopal Conference. Effectively the only private newspaper in Rwanda, Kinyamateka was published in the national language and circulated widely via the network of parish churches. As editor in chief, Sibomana was determined to promote genuine investigative journalism, however many difficulties this transformation was to come up against in a single-party state with no guarantee of freedom of information. The newspaper started to print independent reports that proved highly embarrassing for the authorities. In fact, they dragged Sibomana to court, in vain, several times in 1990: thanks to the support of international human rights organizations and to the paper’s ability to produce proof to back its reports, such intimidation failed.
As head of the ADL and editor in chief of Kinyamateka, Sibomana was one of the very few independent voices in Rwanda in the period leading up to the genocide.
As soon as the genocidal violence started, Sibomana realized that he would be a prime target for the extremists. He escaped from Kigali, and at the same time managed to save the lives of many other people.
“For many people in Rwanda, refraining from murder was, in itself, an act of resistance. Several peasant farmers were killed because they refused to strike the corpses of their Tutsi neighbours. There are courageous and upright men who were not able or did not dare to come to the aid of their fellows and now live with remorse for having failed to do so. There is no merit in my having rescued a few people, because it was in my power to do so. My position gave me a better chance than others”, Sibomana explains on page 86 of the interview he gave to Laure Guilbert and Hervé Beguine in 1996 in Israel, which was published later.
After the war, Andrè Sibomana returned to his job as editor of Kinyamateka and, from the columns of the newspaper, he conducted a policy of active reconciliation until his death in 1998. He adopted seven orphans.