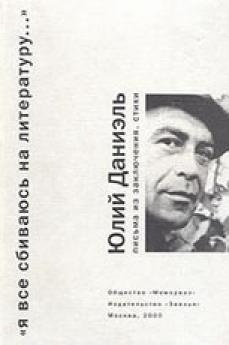 A Russian literature teacher, writer and translator, Daniel published several stories in the West (Report from Moscow, Atonement, Hands) under the pseudonym Nikolai Arzhak. Exposed and arrested, he was tried along with Andrei Sinyavsky and sentenced in February 1966, at the end of an unprecedented trial that caused a sensation in Soviet society and in the West because the accused entered a plea of not guilty and vehemently protested that literature was not the competence of the courts. He was sentenced to 5 years’ hard labour but continued to struggle for prisoners’ rights, often being forced into solitary confinement. He managed to smuggle a cycle of poems (Verses from prison, 1971) out of the camp. At the end of his sentence, he was banned from living in Moscow and settled in Kaluga. A major volume of Letters from prison was recently published at the initiative of his son.