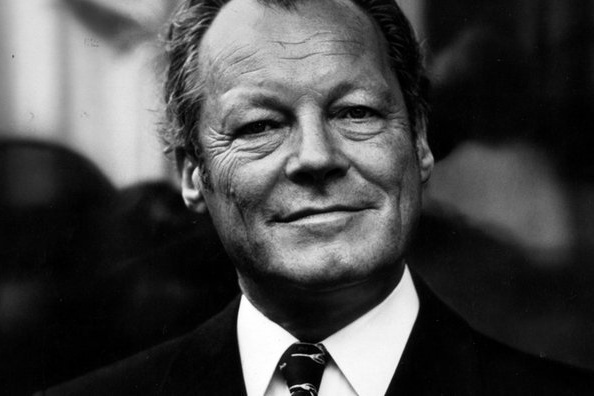 It was December 7, 1970, when West German Chancellor Willy Brandt, on a visit to Warsaw, knelt in front of the monument dedicated to the Warsaw Ghetto resistance. A gesture, as Brandt himself recalled, not at all premeditated: “My closest collaborators were no less surprised than the journalists and photographers who were standing next to me”. This was a day destined to remain in the annals, to make history. A man, as Hermann Schreiber wrote in the Spiegel at the time, who, although not religious, chose a Christian symbolism to speak to the world, with all the strength of those seconds spent in silence; who “confesses a fault for which he is not responsible, and asks for forgiveness that he himself does not need. So, he kneels there for Germany.”

Brandt’s gesture well sums up the parable of an entire life dedicated to opposing all forms of violence, hatred, and antisemitism, promoting at many levels – national and international – reconciliation, equality, and peace. The chancellor, who was educated in socialism by his maternal grandfather and bore the birth name of Herbert Ernst Karl Frahm, after the war officially took his pseudonym Willy Brandt, which he had adopted when he had left Germany for Norway because of his political dissidence. Charged with setting up an opposition cell in Oslo, he continued his journalistic and political battle in favor of democracy.

Already in 1930, he had denounced the harmful effects of hatred towards Jews which – as he had well understood – was a central aspect of Nazi ideology. The intensification of the persecution of the Jews was continually reflected in the articles and writings with which the journalist Brandt informed Norwegians about the developments in the Third Reich. With the greatest disapproval, he recounted the Night of Broken Glass and the subsequent measures of repression by the Nazis against Jewish citizens. His position was not at all obvious: even among his socialist comrades, in fact, antisemitism was unfortunately spread.

In 1938 the Nazi regime expelled him and deprived him of citizenship, and for this Brandt applied for Norwegian citizenship. Having miraculously escaped a Nazi raid because he was wearing a Norwegian uniform, after the war, he settled first in Sweden and then again in Germany. Here he regained his German citizenship. Mayor of Berlin from 1957 to 1966, president of the SPD since 1964, he became chancellor in 1969, a position he held until 1974. Only after his death in 1992, it will be known that he had contributed most of the sum awarded to him on the occasion of the Nobel Peace Prize in 1971 to the reconstruction of the Great German School, the oldest place of Jewish worship in Venice.

For the first time, in November 1960 he visited Israel, where he met David Ben-Gurion. In 1973 he was the first German chancellor to visit the country, meeting Golda Meir, to whom he linked, in addition to a similar political vision, a deep respect and personal admiration. For Brandt, the right to the existence of Israel was inviolable, and since the Thirties, he had known and supported the Zionist movement, even though – during the Middle-Eastern conflict – he worked for a peaceful solution that would also recognize the rights of the Palestinians.

Brandt’s courage and political vision were not always well received at home. According to a poll carried out by Spiegel in the following days, only 41% of those interviewed considered his gesture in Warsaw appropriate, while 48% thought it was exaggerated or out of place. A year later, that gesture was used against him in a no-confidence vote that failed by only two votes. Not only that – there was also a lot of criticism for Brandt’s signature, made during that trip, to the Warsaw Treaty, by which Germany abandoned all territorial claims to Poland, recognizing its borders. The admiration aroused abroad for that gesture, which led him to receive the Nobel Peace Prize in 1971, certainly did not correspond to unanimous domestic appreciation. The Right blamed him for his Ostpolitik, the policy of distension towards the communist East, while the Left accused him of being too close to the US.

Above all, at the time, there was still a lot of resistance, silence, and complicity towards the Nazi past. A real awareness at a popular and widespread level towards the Shoah, as the philosopher Günther Anders wrote, was then still to be reached. The same Lagers on German soil, not only were in many cases not visitable or known: they were often not even in the speeches of those who were born and lived a few hundred meters from these places of death and horror. The turning point came in the 1980s and 1990s, when German responsibility, strengthened by a new generation and the example of men like Brandt, became common and deep-rooted.

Willy Brandt could have avoided, as many politicians lacking his vision and courage do, insisting on such a delicate subject as the Shoah, all the more so since he could boast a past without shadows. He could have looked to the polls, to his immediate success, avoiding attacks and criticism. Antisemitism was still widespread in the post-war period, even among many of his own party companions, while the silence was almost total. He did not.

“Faced with the abyss of German history and the burden of the millions who had been murdered, I did what we humans do when words fail us,” wrote Willy Brandt in his memoirs, recalling that historic day in Warsaw. A gesture that would also inspire former Japanese Prime Minister Yukio Hatoyama, who, on a visit to Seoul in 2015, got down on his knees in front of a memorial to apologize to Koreans for their harsh treatment during colonial rule by Japan.