the writer who bore witness to the Holocaust 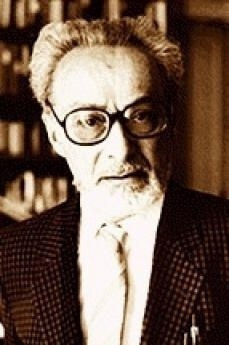 Born on 31 July 1919 in Turin into a family of Jewish faith, Primo Levi obtained his diploma from Liceo Classico Massimo D’Azeglio, a high school specialized in classical culture, and he enrolled in the university faculty of Chemistry. He managed to graduate in 1941, with the highest marks and cum laude, but on his graduation certificate there was the note: “of Jewish race”. So began his career as a research chemist, that would take him to Milan until the German occupation. On 13 December 1943 he was captured and subsequently moved to the Fossoli transit camp where his odyssey started. In a short time, in fact, German took over control of the camp and deported all prisoners into Auschwitz.

It was 22 February 1944, the date that will divide Levi’s life into “before” and “after”. " We had learnt of our destination with relief. Auschwitz: a name without significance for us at that time." In Auschwitz a drastic selection was carried out summarily and in a hurry: «In less than ten minutes all the fit men had been collected together in a group. What happened to the others, to the women, to the children, to the old men, we could establish neither then nor later: the night swallowed them up, purely and simply.» . Primo Levi was deported to Monowitz, one of the camps of the major extermination organization of the "lager" of Auschwitz, whose prisoners were on duty at a gum factory. In a very short time they were shaved, their hair was cropped, they were disinfected and compelled to wear the striped uniform of the camp. On every jacket there was a number sewn on the chest. Behind those numbers there were not people anumore, there were only objects: Levi was häftling (prisoner) 174517. Working. If it works, it goes on. If it breaks down, it is thrown away.

Primo Levi is among the very few survivors. As a witness to such a load of atrocities, he felt the duty to tell about them, to evoke what is beyond description, so that everybody knows, everybody asks himself “why”, everybody questions his own conscience: he starts writing, thus working through his suffering, the annihilation, his eventful return home. In 1947 the manuscript If this is a man, refused by the biggest publishing houses, was published by De Silva. In 1958, with the publication by Einaudi the book would become one of the best-known and most appreciated pieces of testimony about the Nazi death industry. Since 17 April 2012, Primo Levi has been dedicated a tree and a stone in the Garden of the Righteous Worldwide in Milan.