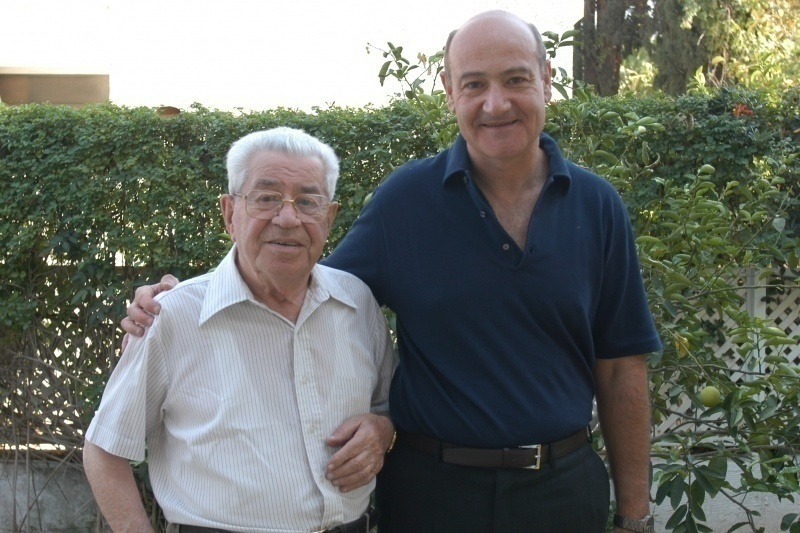 The childhood in Poland, the Shoah and the meeting with Schindler

Moshe Bejski was born in the village of Dzialoszyce,in Poland, near Cracow, on 29 December 1920. When he is a youth, he joins a Zionist movement organizing the move of the young Polish Jews to Palestine to build a new nation in the promised land. Shortly before the German invasion of 1939, he must give up his Zionist dream because of a serious heart disease which prevents him from leaving with his fellow youths.

In 1942, all Jews are deported. The Bejski family is dislocated: Moshe, together with the brothers Uri and Dov, ends up into the work camp of Plaszow, whose Commander's Amon Goeth's sadism (he enjoyed using the prisoners for an appalling target shooting from the room of his bedroom) was depicted by Spielberg's movie Schindler's List. His parents and sister, instead, are shot on place.
Moshe succeeds in dodging the guards during a shift outside the camp and vainly seeks refuge at his Polish neighbours', whose children have until the day before been school and games mates. Only a delivery boy, colleague of him in a Cracow firm, offers him hospitality albeit in very uneasy and dangerous conditions, but also in this case the malevolent curiosity of the neighbours thwarts the only generosity gesture towards a Jew ever experienced by Moshe.

As obliged to "spontaneously" get back to the Plaszow camp, where he finds Uri and Dov again, he eventfully obtains to be added with them to the famous list of Oskar Schindler's factory. This way the three Bejski brothers manage to save themselves and are freed by the Red Army in May 1945. They discover the tragic destiny of their parents and sister and they decide to emigrate to Israel.

The new life in Palestine, the Eichmann trial and the Righteous Commission

Moshe begins a new life in the dreams place that he hadn't been able to reach when he was a boy. The Zionist dream immediately clashes against the hard reality: his brother Uri is killed by a Palestinian sniper on the day when the Jewish State is recognized by the UN. The dream to become an engineer instead clashes with the necessity to work to pay for his education and by doing many sacrifices he graduates in Law, with a thesis on the human rights in the Bible. As become on of the best reputed lawyers in Tel Aviv, he nonetheless feels the obligation to support the newly born Israeli State and he chooses to become a magistrate up to holding the most prestigious office of Member of the Constitutional Court.

Moshe Bejski left his past in German-occupied Poland behind him. For years, no one knew about his tragic history and everyone thought him a Zionist come to Palestine before the Nazi persecution, or even born there. Only in 1961, during the trial against Adolf Eichmann, he willingly revealed his story and origins. As called by Prosecutor Hausner to testify about the Plaszow camp, Bejski delivered an upsetting account of that experience and conveyed to the Court the tragic feeling of the despair and impotence of the prisoners under those circumstances. For the first time in Israel one discovers the deep unease of the European refugees survived to the Shoah, who are unable to integrate themselves and to be accepted by a populace which despises them and accuses them between the lines of cowardice or not having been able to rebel against the Nazis. A huge debate opens in the Countries, also stirred up by the polemic contribution by the Germen philosopher of Jewish descent, Hannah Arendt, escaped to America in the 30es, and one eventually faces the problems connected to the history of the Jews in Twentieth century Europe.The Yad Vashem Memorial, established in Jerusalem for eternal remembrance of the Shoah victims, gains the right acknowledgment and one eventually applies point 9 of the establishing law of 1953, with which the Istael State committed itself to bestow an honor to the non Jews who had saved Jewish lives, by awarding them with the highest title, that of Righteous among the Nations. One establishes the Righteous Commission with the task of running the investigations to ascertain the rescuing acts and make clear to whom the title must be awarded. The President appointed is the most famous judge in Israel, Mr. Moshe Landau, who had presided the Eichmann trial and issued the relative death verdict. Yet, Landau soon leaves the office and proposes the nomination of Bejski who will replace him in 1970, keeping the presidency until 1995, when he retires. In the meanwhile, nearly eighteen thousand Righteous have been honored and have planted a tree in the avenue dedicated to them at Yad Vashem to remember their gesture.

Moshe Bejski's role in the activity of the Righteous Commission has been crucial. While Moshe Landau thought of a panel that would deal with a small number of significant cases, Bejski reversed this stance, with the will to award the title to all who expressed the intention to rescue a persecuted Jew, who hadn't succeeded in saving him, or who had done without running the risk of their lives. For the new President of the Commission, it wasn't necessary to have behaved like heroes to obtain the honor. The great number of cases reported to Yad Vashem èroved that there had been a real involvement of many people, common people, in the attempt to wrench the Jews from extermination. Making their stories known meant debunking the myth according to which the opposition against Nazism was an impossible deed, that there wasn't any concrete possibility to help the persecuted without running extreme risks. Many times, a little intervention would suffice to prevent from a big tragedy. This is why it is important to value and publicly feature every opposition gesture that was made in favour of the Jews in Nazi occupied Europe. To obtain this result, Bejski didn't spare himself: he dedicated the best years of his life to it, giving up much of his private life, remaining at work until late to run the meetings of the Commission after the intense days at the Constitutional Court. His activity, which was entirely volunteer, was able to involve and transmit enthusiasm to the other members, by broadening their competences, creating the subcommissions to be able and deal with more cases, by supporting the internal debate without ever giving up investigating up to the last useful element for a correct and loyal evaluation. The dilemma he found himself confronted with have been enormous: how to judge who has saved a Jew, but killed another man after the war? Or the woman who hid the persecuted while she prostituted with the Nazi officials? Or those who saved dizaines of Jews in Poland without by any means giving up their anti-Semitic opinions? Or also those who helped by receiving money back? Not only that. The idea of the individual responsibility, of the moral debt of the survivor, of thankfulness towards their saviours brought Bejski to get involved personally with his rescuer, Oskar Schindler. After finding him again at the beginning of the 1960s and wrenching him out of bankruptcy and imprisonment in Germany, he invited him to Israel and he valiantly committed to honoring his action, clashing with Landau until the apotheosis of Spielberg's film, which made him famous all over the world. Besides Schindler, Bejski committed himself to helping other Righteous people who lived in precarious state in the Eastern European Countries or who needed medical assistance, and he fought hard to obtain the Israeli state's commitment to help them.

Moshe Bejski leaves us a precious heritage. His quest for the Righteous taught us that it is possible to act against the Evil with a simple act of Good also without becoming martyres, so far as one has the moral push to do so; that there are no barriers neither ethnical, nor religious, nor ideological nor religious, when one puts the human being at the centre of one's world of values. Finally, it proved that the best way to safeguard the example of the Righteous is that of feeling personally responsible towards them, like they felt responsible towards other human beings. Reaping Moshe Bejski's heritage means working through his path, honoring the Righteous all over the world and every time genocides or other crimes against the humankind are perpetrated.

Since 13 November 2008 a tree is dedicated to Moshe Bejski at the Garden of the Righteous of Milan. In his memory theatre playwright and producer Paola Bigatto and actor Massimiliano Speziani have created the show "Il Memorioso" that has been staged all over Italy also in cooperation with Gariwo.