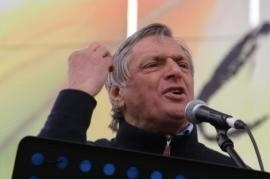 At the penultimate meeting of the series “The priests who made Italy civic: from father Milani to father Ciotti” speakers debate about “Righteous legality” with the participation, together with Nando Dalla Chiesa, also of father Luigi Ciotti, founder of Gruppo Abele and Libera.


Father Ciotti stands up and speaks out loud - “I want to look into your eyes” he says – and before starting he reminds the audience that these days the European Parliament adopted the directive for the confiscation of the Mafia goods. “Today it is difficult to me to talk about legality – says father Luigi – and this can seem like a paradox because for years with my association Libera I had people talk about it, in the world of education and outside it”. So it is better to introduce the concept of “Righteous legality”, a key requirement of social life to promote the full development of human beings and build the common good.
Dealing with this topic is often difficult because  the word “legality” has worn out because of a “theft of words” that has emptied  some concepts of their essence. “We must defend them from manipulators – recommends father Ciotti -, those who talk about legality, but in fact think of a kind of legality that can bow to only for one’s convenience”.


Legality is therefore Righteous when it is a means and not an and. It is not the goal of the whole thing, and it only works if it is used properly. But how to make its best use? By making its two key element coexist: individual responsibility and social justice. The former is the premise to legality, but its true goal remains social justice, which is the horizon, the reference that we should always keep in sight.


Without these principles legality is emptied of every content, becomes an abstract concept, a sheer facade. “Of this legality without ethics – warns father Ciotti, whose voice becomes more passionate to condemn the lack of morality – our recent history offered us numerous example, such as laws far from the common interest, tailor-made laws, or that went erode equality and spoliate our ability to understand and help our neighbours, such as migrants. But there is no legality without equality”. Unless all individuals are recognised in their rights and dignity, thus, legality can become a means of exclusion, discrimination and power. And against these practices “It is not enough to be moved, we must move all together, stop holding discussions about the poor and the last ones and start perform consistent deeds to recover human dignity, proximity, relation and rebuild all various ‘we’”.


This exhortation starts precisely from the tale of the first “we” told by father Ciotti, the encounters that changed his life. “When I was 17 – he recalls – I met a man, a tramp, sitting on a bench in Turin. He was a doctor, he had lost everything, and he saw the young people who took drugs in the streets. One day I went to his bench and he was not there anymore, he was dead. I immediately understood that that was not a banal encounter. That tramp had asked me to take up responsibility and bring people dignity, and dignity starts from acceptance: the measure unit of human relationships is relation, in facts. My story became this way, and now I am here thanks to the “us”, the common identity that I was able to feel about that tramp”.


The first great “we” told by father Ciotti was though the National Coordination of the Hospitality Communities. Father Luigi recalls when a priest from Milan, who had been just nominated chaplain of the Beccaria minors jail,  asked him for advice on how to deal with young drug-addicts. “We already had the communities, I suggested him to open one outside jail”. The priest was Father Gino Rigoldi, who thus paved the way to his Comunità Nuova. Father Ciotti then remembers another important meeting when he said “we” or “us”: the encounter with father Andrea Gallo, in Genoa.


From here started my commitment in Gruppo Abele and Libera. “We did not change the world, but many people found courage and commitment again, raised their heads again, discovered they own responsibility. We must get involved, get our hands dirty, put ourselves at stake to build this justice, to tie the Sky a bit closer to the Earth. This means to be anti-Mafia”.


Father Luigi thus remembers father Puglisi and father Diana, the two priests who were murders, respectively in the Brancaccio quarter of Palermo and in Casal di Principe, because of their commitment to build legality and fight organized crime. He rejects the definition of anti-Mafia or anti-camorra priests,by quoting the sentence Cardinal Pappalardo pronounced in front of the corpse of father Puglisi: “They killed a priest who did his duty. For him pastoral activity was also a matter of civil deliverance”.


Libera’s founder quotes Cardinal Carlo Maria Martini and his sermon of 1984, in which he identified three “plagues” of society: solitude, violence and white collars corruption – which still need be fought against – and reminds the call “don’t interfere” the Mafia addressed to the Church after the call of Pope John Paul II in the Sicilian Valle dei templi (Valley of Temples). “After Falcone’s death many people felt the need to put together a different Italy, and the death of father Puglisi raised even more strongly the wish to “interfere” where the dignity of people is trampled on”. And in this path of Righteous legality and struggle against organized crime, remembers father Ciotti, it is important for everyone to join forces.