writer and enemy of Islamic fundamentalists 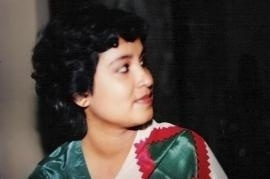 Taslima Nasreen – also known as Nasrin – was born on 25 August 1962 in Mymensingh, in western Pakistan, later to become the independent state of Bangladesh. During her youth she was repeatedly raped by members of her own family and other men and became particularly sensitive to the issues of women’s emancipation. She graduated in medicine, like her father, but has also worked as a journalist and has written both poetry and novels. In these she expresses her support for equal rights for women and takes a stand against the oppression of minorities in Islamic society and especially in Bangladesh.

In 1993 Islamic extremists issued a fatwa against her, with a price on her head, following the publication of a collection of her articles. She was also in trouble with the State after the publication of her book “Lajja” – “shame” in Bengalese – on the torture inflicted on the country’s Hindu minority. Her passport was withdrawn, she was forced to leave the medical profession and prevented from going to the annual book fair. In 1994 the American periodical The Statesman published a statement in which she declared that “the Koran should be completely revised”; in response, fundamentalist religious groups demanded that she be hanged and the government took her to court for blasphemy. Fearing that she would be sentenced and killed in prison, Taslima hid and asked to be able to leave the country. Two months later she was granted permission to go into exile.

She settled in India and started publishing her autobiography in three volumes, the last of which, “Dwikhandito”, was banned in November 2003 by the government of the Indian State of West Bengal. The European parliament awarded her the Sakharov Prize for freedom of thought, the first of a long series of international prizes. In 2004 an Indian Islamic cleric offered a new reward of 20,000 rupees against her and in 2005 she was prevented from reciting a pacifist poem entitled “America” before a huge audience of Bengalis gathered at Madison Square Garden for the annual convention of the Bangladeshi community in the United States.

In March 2006 she signed the letter “Together against the new totalitarianism”, the response of illustrious cultural figures to the violence that followed the caricature of Mohammed in the Danish newspaper Jyllands-Posten. In March 2007 an organization called “All India Ibtehad Council” promised 500,000 rupees to anyone who cut Taslima’s head off. Her state of exile in India was becoming dangerous due to both attacks on her person and the hostility of the government, which were imposing numerous bureaucratic constraints on her to encourage her to leave the country. As a result, Taslima Nasreen moved to the USA.