the driver who tried to avert the massacre 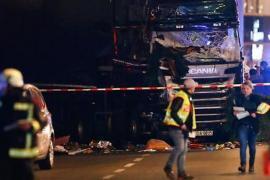 A logistic problem. This is what caused the death of Lukasz Urban. After leaving on Friday from the hinterland of MIlan on board of his truck loaded with rolled metals, he arrived in Berlin on Monday about 7 o' clock in the morning. At that point he was told he would have to wait 24 hours before being able to unload, and he lost his temper.. he wanted to be home by Thursday to buy the Christmas presents. Thus he stopped in the German capital and decided to eat a kebab. About 3 o' clock in the afternoon he called up his wife to no avail, she called him back one hour later but this time it was Lukasz who didn't answer. Probably, over this time span Lukasz' truck had already been hijacked and used as a weapon to commit the massacre.

What happened then was reconstructed through the information released by the GPS. "The truck was started, stopped, then moved forward, and then back, as if someone had been trying to learn to drive. I knew there was something wrong” said Ariel Zurawski, cousing of the driver and owner of the company by which Lukasz was hired. Harrowing information, that show from the one hand the lacking preparation and the blatant improvisation, and on the other hand the hijacker's murderous resolve. The truck then definitevely was started again at 7.40, headed again for its final destination: the Christmas market of Breitscheidplatz.

Only thanks to the autopsy and the scars left on the corpse of Lukasz Urban, it was possible to get a glimpse of the horror that took place in the truck's cabin. His face is swollen, his corpse was tumefied and bloody, he reported numerous cut wounds and three bullet holes. In the last moments of his life, the driver would have opposed his assailant violently and with determination, he would have tried to use his sturdy building, 120 kg for one meter and eighty-three centimeters, to deviate the run of the truck. In fact, it would have been precisely this heroic deed to prevent the heavy vehicle from completing its run. The knife blows and gun shots, however, in the end would have wom

Lukasz Urban died at age 37, leaving a wife and a 17-year old son. He is the example of a Righteous, a Righteous by chance. Lukasz died suffering and aware of what was happening, but struggling until his last breath to try and rescue some strangers and prevent them from sharing his own fate. He became an example, probably without ever seeking this, and he reminds us that we are all called to fight against terror, from the simplest and trivial deeds to the most heroic ones. For all these reasons we demand that Lukasz be remembered with a tree in the Garden of the Righteous of Warsaw.