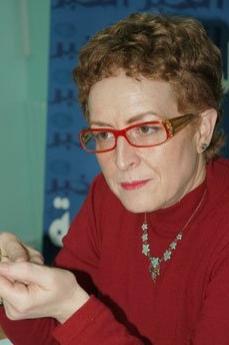 Khalida Toumi Messaoudi is the symbol of the movement for women’s rights and equal opportunities in Islamic countries.
She was born in 1958. Of Cabil origin, a writer and former maths teacher, she decided to devote her life to the struggle for equal rights for women, founding in 1985 the “Association for the equality of men and women before the law”, following the approval in Algeria of the Family Code which represses and tramples on women’s rights.
In March 1993 she was sentenced to death by the" Front for Islamic Salvation" (F.I.S.), an Algerian fundamentalist movement. As a result, she lives in hiding in her own country, refusing to move abroad so as not to abandon her compatriots. (March 1993 is known by the Algerians as “black March” because of the numerous crimes committed by the terrorists). On 12 June 1993 a letter of the "Movement for the Islamic State" (MEI) signed by Said Makhloufi formalized her death sentence. One year later, during a pacifist demonstration, Khalida was injured in the leg. The attack, which caused several deaths and left scores injured, failed to stop the protesters who continued to march.
Despite the death sentence, Khalida carried on leading numerous processions of women who accused the politicians of links with the fundamentalists.
In 1997 she was elected a member of parliament and in her capacity as a minister she took part in the national commission promoted by President Bouteflika to work draw up a new Family Code.